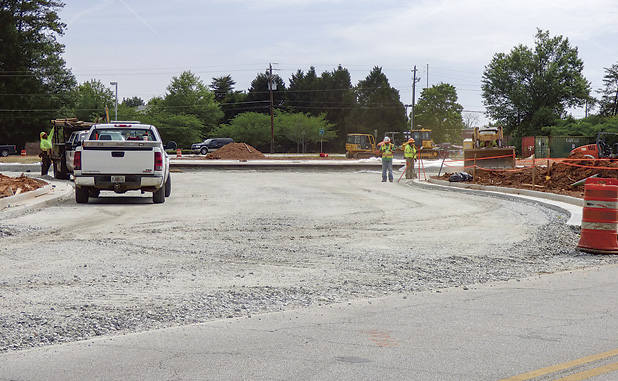 Those travelling along Hood Avenue near Ga. Highway 85 North in Fayetteville have noticed the construction activity for a large roundabout that will soon link Hood Avenue and Ga. Highway 92 to Hwy. 85. The first portion of the realignment project is expected to be complete by the end of May

Coming next will be the relocation of the traffic signal at Hwy. 92 and Hwy. 85 North just one block to the south at Hood Avenue along with the completion of the remaining portion of the roundabout serving Hwy. 92 traffic. Those parts of the project are expected to be completed by the end of July, weather permitting, said Hindman.

Once the large roundabout and new traffic signal are operational, construction crews will concentrate their efforts on the east side of Hwy. 85 North where Hood Avenue will be extended just south of Hudson Plaza to another roundabout that will link to Kathi Avenue and the extension of Church Street from where it currently ends at Georgia Avenue.

Once that portion of the project is completed, now expected in spring 2017 or perhaps sooner, the large transportation project will be complete.

At completion, the realignment project will link Hwy. 92 and Hood Avenue to Kathi Avenue and Church Street and on to North Jeff Davis Drive.

The project was funded through the 2004 Special Purpose Local Option Sales Tax (SPLOST) with $7.8 million coming from Fayette County’s share and $645,000 from the city.

The city will use an additional $1.155 million to fully fund the estimated cost increases to the project. This brings the total cost to complete the project to $9.6 million.

The total length of the project is approximately 6,000 feet.