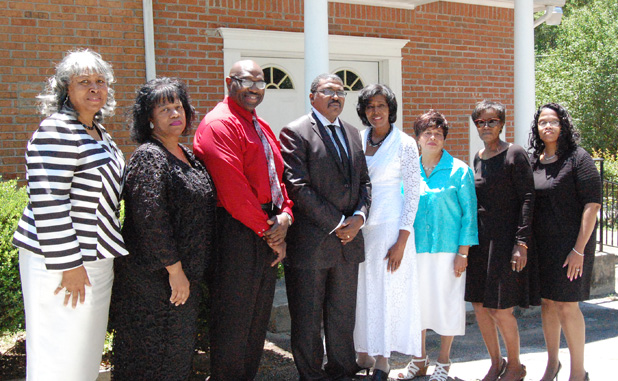 Rising Star Baptist Church will celebrate a milestone Sunday, May 22 — its 100th anniversary — and the community is invited to join in the celebration.

Along with a historical display of the life of the church, founders recognition, and special celebration tributes, the anniversary recognitions will culminate with a guest minister, the Rev. Willie Orr and the Shiloh Baptist Church of Alvaton, at 2:30 p.m.

Back in 1916, a committee was formed to organize the church. This committee included Deacon Charlie Patridge, Brother Robert Alphabet, the Rev. R. L. Davis, the Rev. A. Z. Whatley, the Rev. L. A. Lovett, Professor A. Z. Kelsey, the Rev. E. M. Ayes and many others.  Members gathered for the next two years  in a log cabin that was known as the Grooms Chapel School and named the church “Rising Star Baptist Church.”

In 1918, a log cabin was erected as the first church building. The first service was held on the fourth Sunday in May 1918, with the Rev. R. L. Davis as the first pastor. Services were held there until 1937, when one acre of land was donated to build a school. The R. L. Matthews Training School, built by the WPA,  served as a place of worship for the next two  years.

On March 31, 1938, R. L. Matthews deeded  acre of land to Newt Perdue and others to build a church. A rough, frame church building was erected on this 1/4 acre of land in July 1939 under the leadership of the Rev. Robert Alphabet, who pastored for four years.  The present church is situated on that land today.

Because of the growth and progress of Rising Star, the church purchased 1  acre of land next to the church from Mrs. R. L. Matthews. The existing structure was built in 1961 under the leadership of Rev. G. H. Huntley, who served as pastor from 1960 to March 24, 1984, serving a total of 24 years until he retired.

“Under Rev. Reeves,  the church grew spiritually and financially,” a spokesperson said. The church went from meeting on the fourth Sunday only to the second and fourth Sunday. Many deacons were installed and the deaconess ministry was started.

In March 1999, Reeves was called from labor to reward, and, the Rev. Milton B. Reeves, son of the former pastor, was called as acting pastor, and installed as pastor the following March.

“Under his leadership, the church is continuing to prosper spiritually, socially, and financially,” the spokesperson continued.  “ He is a strong preacher and teacher of God’s word.”

“Rising Star has enjoyed God’s favor over the course of a century,” the spokesperson said.  “Through the swift transitions of time, the church has built our hopes on things eternal and held to God’s unchanging hand.  The church is now ‘preparing for the Kingdom of God in 2016.’ We are proud to celebrate 100 years – a century of service.”