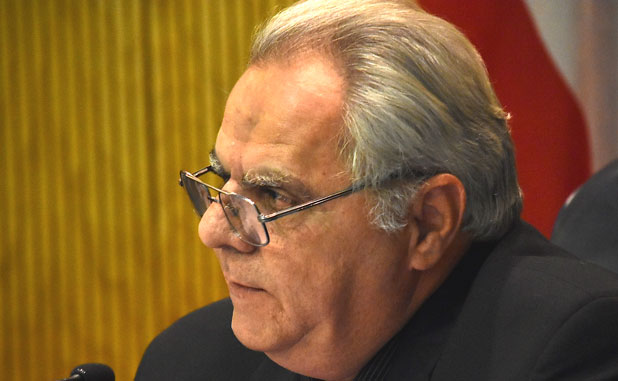 A lengthy discussion regarding firearm use on residential property yielded no new action by the Fayette County Board of Commissioners last month, as a proposed ordinance calling for some changes was defeated at the April 26 regular meeting.

Vice Chairman Randy Ognio recommended a change to the county ordinance in effect pertaining to the discharging of firearms after an inquiry from a constituent.

The current ordinance allows for shotguns to be discharged on 10-acre residential lots if double-ought or smaller ammunition is used. Residents have much more flexibility on lots of 25 acres or more.

Ognio said a citizen with a 10-acre lot and a proper backstop was informed by code enforcement that he could not fire his rifle into the backstop. This occurred after the resident set up a target practice area and neighbors called county officials to complain.

The change proposed in the ordinance would not involve any new zoning, Ognio said, so no one would be able to set up a public firing range on their property as a result of the change.

Commissioner Steve Brown suggested that the new ordinance being proposed include a permit and inspection requirement for backstops to ensure that they are held to a recognized standard for safety.

When Commissioner Charles Rousseau pointed out that this appeared to be an isolated request, Ognio replied that there were likely other residents engaged in similar activity whose neighbors had not complained. Brown added that there are a lot of gun owners in Fayette County and there are a few gun ranges available but at a cost.

Commissioner David Barlow, citing his extensive experience as head of a gun safety organization in Mississippi in the past, said he oversaw the closing of a firing range there because of the encroachment of residential development that he and others thought was getting too close. He said he was opposed to this measure because 10-acre lots are too small for this kind of activity and there are more than 900 such lots in the county that would be affected by a change in the ordinance.

County Administrator Steve Rapson clarified that point upon Barlow’s request, saying that there are 923 such lots in Fayette.

At one point Brown compared this issue to a previous episode in which some affluent former pro athletes relocating to the county applied to construct gymnasiums on their property. “I know that sounds extreme, but it shows how a small portion of the population might want to do something unusual with their property,” he said.

When Chairman Charles Oddo asked about the possible liability, County Attorney Dennis Davenport pointed out that should an incident occur, any victims would likely go after whoever fired the weapon as well as the county itself for allowing it. The risk could be less on larger lots, but that risk goes up as the acreage goes down, although it is hard to quantify that, he said.

Brown countered by saying that 25-acre lots now can be utilized for such activities as deer and turkey hunting, while putting specific standards on 10-acre lots could actually make them safer.

As for installing berms, Davenport said regulating those would make the county responsible for inspecting them regularly. “That makes us a guarantor,” he said.

Rousseau continued to emphasize the negative aspects of this proposal, saying it would increase the burden on county staff and the potential for danger was great. He added that he was uncomfortable with providing additional target areas for people like the Columbine shooters, who he mentioned by name.

One Brooks resident expressed her opposition, saying that while most of her neighbors own guns and are Second Amendment proponents they are not in favor of shooting at all hours which has been known to occur in the area. She said she probably would not have bought her property had she known how many in that part of the county use their land as a firing range. She added that many people in the county likely are unaware of this issue and there should be more community feedback before a change is made.

In response to a question from Rousseau, Davenport said the current ordinance sets no limit on how many people a property owner can invite over to shoot.

Ognio moved to approve the new ordinance with Brown’s recommendations regarding standards for permitting and inspections.

Oddo stated that he is a licensed gun owner but was not comfortable with the proposal because it was not clear how the county would deal with it and “what is in place now is working.”