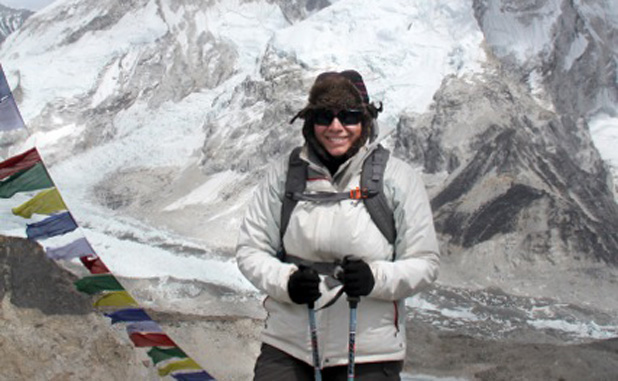 Sarah Bradfield of Peachtree City, mother of two and an in-house graphic designer for Tyrone’s Operation Mobilization, packed her bags last week and left for Africa where she will join 19 other women from around the world in a climb up Mt. Kilimanjaro to raise funds to fight human trafficking.

The event is called “Freedom Challenge,” originally “Freedom Climb,” and is an event Bradfield has been involved with since its inception in 2011.

The Freedom Challenge climb was conceived and launched by locally based Operation Mobilization’s Cathey Anderson, who recently passed away. What started as a vision has become a global movement, with climbs all over the world.

When asked why she is taking vacation time to climb the highest free standing mountain in the world with extreme temperatures and weather conditions Bradfield said,  “A fire started in my heart during that first meeting for a previous Mount Kilimanjaro Freedom Climb  I felt a deep scream, ‘I want to go!’  but something told me ‘I can’t do it, they are looking for mountain climbers, not people like me.’  But then I was offered an opportunity to go on the Freedom Climb as a media person/photographer. I was all set to go- had my visa and plane ticket — and then found out I was pregnant.  I could not go then, but that desire never left. There has always been a part of me that knew I was supposed to step out from behind the computer and be there in person, on the front lines, with the climbers, being a voice for the voiceless. Now I am climbing Mount Kilimanjaro to help raise awareness and funds to help end human trafficking.”

“The Freedom Challenge’s purpose is to be a voice for the voiceless; for those who cannot declare freedom in their lives and climb out of their circumstances on their own,” says Tina Yeager, Newnan resident, Freedom Challenge US Director, and Freedom Climber. “The climb is merely a symbolic gesture of what women and children around the world go through every single day. It symbolizes their arduous climb to freedom.”

Over their seven days on Mt. Kilimanjaro, the Freedom Climbers will face strong African heat at the base and adverse minus-20 degrees at the nearly 20,000 foot Summit. Bradfield has also climbed the Freedom Challenge Everest Base Camp Trek in Nepal, which was 90 miles in 11 days in the Himalayas.

“I am hoping that as more people become aware of the atrocities against women/children, that more people will join The Freedom Challenge in the fight against human trafficking and other forms of slavery — whether that is by participating in a climb themselves, donating to the cause, or just praying,” Bradfield says.  “I would love to see our Freedom Challenge Mt. Kilimanjaro team raise funds that will keep these projects going to continue helping oppressed women and children.”

The Freedom Climbers will return home Feb. 22 with much to share.