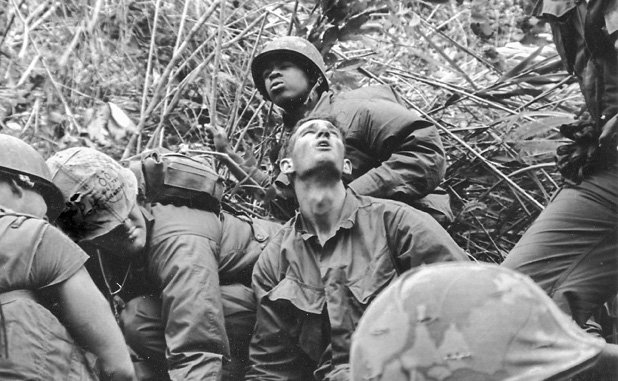 As many of you know I sometimes try to make you think outside your comfort zone, especially on the subject of how egregiously our country breaks faith with our own men and women in the military when we send them off to war. Even though this was long ago, consider one man’s combat experience for a little taste of what it is like, and the national commitment that should stand behind every one of our troops in combat.

R.J. Del Vecchio was a Marine combat photographer in the Vietnam War. He lives in North Carolina and wrote this recently:

It is Lent, with Easter coming up, and I was thinking of something that happened in our church a while back. The priest, in part of his sermon, asked the congregation what I realized later was supposed to be a rhetorical question. “Who among us has seen the face of Christ?” he asked loud and clear. Without thinking, I raised my hand, but of course no one else did, and then he looked at me briefly and continued with the sermon.

Later, someone asked me what was I thinking, to get in the way of the sermon. I had to say I was honestly answering what I thought was a serious question. That got me a strange look, so I explained.

Late in the very hot morning of May 7, 1968, I was crawling backwards from an intense battle scene. I was wounded, with one hand useless and one foot swollen to football size after being run over by a tank in the confusion and melee of battle. All I could manage was to crawl, using elbows and knees to push along through the hot sand of the place.

As I was making slow progress, another unit of Marines came forward to join in the fight. One of them stopped by me, looked down, and asked if there was anything he could do for me. By then I was getting dehydrated, so I asked if he had water. He slapped his canteens, two were empty already, one still had just a little left in it. He offered it to me.

He was going forward into hell, on a day when it was at least 120 degrees and the sun was full, and he offered me the last of his water. He was a young white man, with short, dirty blonde hair, but in that moment his face was the face of Christ. I remember it as clearly as anything in my life, his face, the outstretched hand with the canteen, the blazing sun, the staccato sounds of firing and some explosions just a few hundred yards away.

I said no, thanks, you will need it more than I, and waved him on. He went forward and I continued in the opposite direction, and I do not know if he survived that day or the days that followed or not. But I have always known what his offer meant, and how that is humanity at its best, and how, for me, his face took on an aspect of divinity in that moment.

Others may not see it that way, but that is what is etched in my memory.

Call me too imaginative, it does not matter. That was as real an image of God as we get here, and I remain ever grateful for it.

In February of that same year Del went with elements of the Seventh Marine Regiment into mountains they called Charley Ridge to hunt the invading NVA enemy. He carried a weapon but his primary tool was his camera. The climbs and descents were steep in hot, steamy jungle, moving slowly on paths in single file, hyper-vigilant, five meters separation so only one man would get hit at a time.

As with most jungle firefights in Vietnam, it was a surprise L-shaped ambush when an enemy machine gun opened up at the front of the line and Del could hear the responding crackle of M-16 rifles, a grenade explosion, faint shouts and screaming and the command of “Guns up!” to hustle the M-60 machine gun team into the fight. Del worked his way up the column to do his job, moving toward the ambush.

On a steep slope down Del reached the lead platoon in contact. Firing continued, Marine bodies lay at a turn of the path with a corpsman working on them. A wounded man screamed for help while Del took a photo of the first dead Marine he’d ever seen, then he helped the corpsman with a Marine whose leg bones had been broken up by hits and bandaging them was like working on sacks of jelly. When the wounded Marine slipped into shock and then died, the corpsman sat by him a moment with head hung low then beat the ground with his fists.

A slim young guy appeared out of the jungle carrying a wounded Marine, and Del heard his name was Jones, that this was his second trip back from the point of contact, as Jones sat on the ground for a moment, crying, then pulled himself up, turned and went back around the corner of the path again, going to get more Marines from the kill zone.

Del slid further down the slope forward, snapping photos as he was stunned at the bravery of that slim Marine. He saw another Marine with a sucking chest wound die while several others worked furiously to keep him alive, and them slumping to the ground, exhausted and dejected.

Jones came around the path once more, with another body. He collapsed again, cried again, and finally lifted his head and said there was one more out there. He seemed to be having trouble getting himself ready to go again, and Del put the camera down, picked up his weapon and went to him. Del says he had no conscious decision to be courageous, he simply could not let Jones go out again by himself. Two Marines who’d been guarding the path looked at Del and Jones, then went with them.

The enemy might have been gone by then, but still each man had to push down into his gut the ball of fear trying to strangle him, eyes darting about, gun muzzles ready, the smell of gunpowder, blood, and burned flesh filling their nostrils, explosions of the firefight replaced by the buzzing of large flies gathered at the blood pools on the ground.

The last Marine’s body was in terrible condition, one of his legs blown off at the upper thigh.

The climb back up was steep, especially carrying a body while they swapped off carrying the leg and thigh, scrambling up the hill, pulling at roots and branches and slipping on the loose earth to catch up with their unit.

At the top of the slope, exhausted, Del picked up the last Marine who had died of his wounds, put him in a fireman’s carry across his shoulders, and strained up the slope one step at a time, in the suffocating heat and humidity while his vision got narrower and narrower and the buzzing in his ears louder and louder as he fought step by step, upwards. When the ground leveled and Del realized he was finally at the hilltop area, he fell to his knees, others took the body from his shoulders, and he fell forward in a daze, never noticing the impact with the ground.

When, 34 years later, Del finally went to a reunion of that Marine unit, more than anyone else he wanted to find Jones, the bravest man he ever saw, just to shake his hand. But he was not there; he had been killed in another battle a month later. Del says he trusts Jones is with God, in comfort, light, and peace, but wishes so much he were still here, having lived a good life.

Del is just one of countless people we have sent to war without giving them the complete support and commitment of our country. From more recent conflicts there are thousands of similar stories of sacrifice while the talking heads on TV news chatter of combat they know nothing about, while our politicians play puerile games turning our military into a social experiment, while political appearances drive war strategies, while we get involved in wars without the slightest commitment to overwhelming force to win, while our own President advertises to our enemy when he will order our troops to quit the fight, while battle-hardened officers are squeezed out because their politics do not lean far enough to the sensitive side, while rules of engagement (ROE) are imposed to put speed bumps in combat to protect civilians while endangering our own troops, while the spineless go-along-to-get-along Pentagon brass dances to the tune played for them by the White House.

America looks the other way because the ever-trimmed down military is for volunteers, isn’t it? We can ignore them and focus on our 401K, getting our kids into the right schools and make sure we take time for the important things like watching the Super Bowl and the Oscars and voting for more free stuff.

A friend named Bill Neal, who commanded an infantry company in the Vietnam jungle long ago, recently contacted his modern day counterpart commanding that same infantry unit in Afghanistan.

Bill told him how much he had counted on close air support long ago when in contact with the enemy, that a helicopter pink team of a scout helicopter and gunship would be there within 15 minutes to put fire where he needed it.

Bill’s current counterpart said he doesn’t even bother to ask for close air support because by the ROE his request has to go up his command chain and through lawyers, and over to the Aviation units and down their command chain, through their lawyers, and if air support ever does arrive it is too late to do any good. But the rules are being followed.

Del describes the mind of ideologues now in charge as Teflon-coated granite. Nothing makes a dent, nothing sticks. Those of us who know the blunders they are making with our military are to them just monkeys chattering nonsense in the trees.

Now our President orders the military to place top priority in all operations on climate change. America yawns, and turns the channel to the latest sitcom.

[Terry Garlock lives in Peachtree City and occasionally contributes a column to The Citizen. He was a Cobra helicopter gunship pilot in the Vietnam War. His email is terry@garlock1.com.]