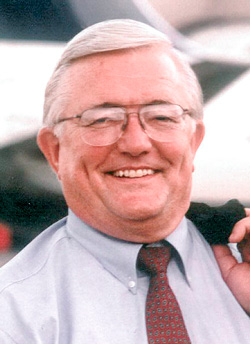 Maurice W. Worth of Fayetteville, Ga. passed away on Thursday, February 11, 2016.

He retired as Chief Operating Officer of Delta Air Lines in 1999 after a 39 year career.

He is survived by his high school sweetheart and wife of fifty-five years, Rosa Lee Worth; his son, Michael Worth and his wife Cheri of Athens, Ga.; his mother, Mary Worth of Fayetteville and family dog Mollie.

He was preceded in death by his father Maurice Worth, Sr.

Maurice was born and raised in Glasgow, Va., where he was an outstanding athlete in high school and later attended Washington and Lee University.

At Delta, Maurice had a reputation as a respected leader who had a great rapport with the employees, primarily because he had worked his way up through the ranks and could relate to them.  He frequently went to the various work areas and interacted with the employees listening to their concerns and seeking their ideas.  He had a deep respect for the Delta people and often referred to working with them as a privilege and an honor.

After his retirement from Delta in 1999, he formed The Doral Company, a consulting firm specializing in aviation, international business and government affairs. The Doral Company served a wide range of clients, including the State of Oregon, Planning Technologies, Inc., Definition 6 Technologies and Beers/Skanska USA.  He served as president and CEO until retiring in December, 2010.

Arrangements will be made at a later date.  In lieu of flowers, donations may be made to the American Red Cross, the Fayette Presbyterian Church or the Fayette Fire Foundation in Maurice’s name.