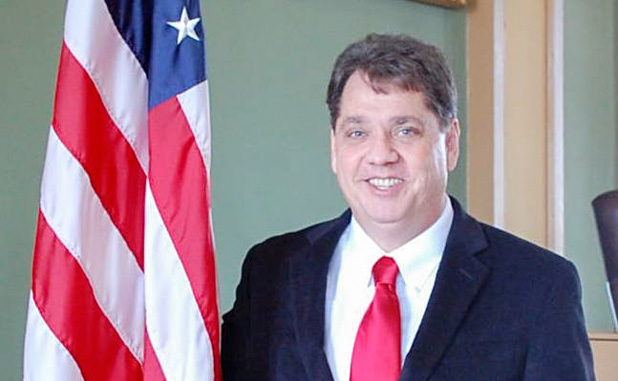 The decision by Congressman Lynn Westmoreland not to seek re-election led to Sharpsburg business owner Richard Mix announcing that he will run for the Republican nomination for Georgia’s 3rd District Congressional seat. Mix responded to several questions posed by The Citizen.

All other candidates — except state Senator Mike Crane, so far — have responded to the questions. The Citizen will publish those responses in subsequent editions.

The six questions asked of the candidates included:

1. Provide a brief background description of yourself.

“I was raised in Marietta and attended the University of Georgia where I graduated with honors with a Bachelor’s degree in Business Administration. After graduation from UGA in 1986, I worked in the beverage industry and then for Dun & Bradstreet. In 1996, I left the corporate world and founded Pit Stop Sanitation Services before leaving for Hollywood to pursue film production.

“In 2000, I was executive producer of a film with Bryan Cranston and John Ritter, among others, before returning to Georgia where I served as President and CEO of Mix International Media. In 2008, I executive-produced the feature film ‘Conjurer,’ starring John Schneider. I later co-produced a ‘Dukes of Hazzard’ 30th Anniversary special with Schneider.

“I left the film industry after 2008 to pursue my interest in vintage toys and collectibles. I relocated to Newnan in 2012 where I and my wife, Kelli, own and operate Full Circle Toys. I am the author of several books on collectibles. I am also a licensed auctioneer and am active in numerous community organizations and charitable causes. Kelli and I have two teenage daughters who attend Trinity Christian School in Sharpsburg.”

2. What sets you apart from Lynn Westmoreland?

“What sets me apart from Lynn the most is the fact that I am not a politician. I am a father, a businessman and a concerned citizen who has become disenfranchised with the political system. Like most Americans, I have had to work harder and harder for less and less in recent years while the government takes more and more, erodes our personal freedoms and over spends our tax dollars.

“I believe it’s time to take Georgia values to Washington. The more decisions can be made at the state, local, and community levels, the better. The people of Fayetteville know what is best for their community. There has been far too much legislating from the bench and rule by executive order coming out of Washington.

“I also believe that politicians should live by the same rules as the rest of us. It is not right that legislation is being written by lawmakers who exclude themselves from the laws that they create for the rest of us. It’s time for less legislation, more personal freedom and more transparency.”

3. Are you conservative or liberal in the areas of fiscal accountability and social issues?

“I am conservative on fiscal issues and slightly more moderate on social issues. On fiscal issues, I advocate lower taxes, reduced government spending, a balanced budget and eliminating debt. I also support free trade, deregulation and more use of private enterprise resources.

“On social issues, I advocate more personal freedom, less intrusion in our private lives from government and more engagement by private citizens, non-profit groups and the faith-based community. It’s time to change the culture of politics. It’s time for someone with ‘Real World’ experience and not political experience.”

4. What sets you apart from the other candidates?

“First, I am a businessman who has worked for both Fortune 500 companies as well as started, owned and operated several small businesses. I have created jobs, made payroll and contributed to the economy. This mixture of both corporate and small business experience has given me a unique perspective on economic factors.

“Second, I am not wealthy or a politician. I am a regular hardworking American who can relate personally to the day-to-day challenges that so many face today.

“Third, I have been fortunate to travel to more than 40 countries around the world and have hundreds of friends who live on nearly every continent. I have seen first-hand the impact of political and social programs around the world and the role that America plays on the world stage. This unique global perspective is crucial to help understand the many challenges and threats that we face today, and vital to make important decisions on a national level. My view and knowledge of the world extends far beyond the borders of this district.”

5. Who do you listen to and whose opinions do you respect in your private circle?

“My parents taught me the many guiding principles that help shape me to this day. They were married 55 years until my father passed away about a year ago. From them I learned honesty, integrity, hard work and many other important life lessons. I am blessed with a strong supportive family who I turn to often for opinions, suggestions and help.

“While I was blessed with a strong supportive family, far too many children today aren’t so lucky, and it is this breakdown of the family that is causing many problems we see in society today. Many kids are not being taught how to behave and how to function properly in society. It is crucial that we engage the faith-based community, non-profit groups, and other organizations in helping guide our youth, and such initiatives are a large part of my campaign platform.”

6. Please speak on your personal beliefs in whatever way you deem most significant and how those beliefs figure into your candidacy.

“I believe in honesty, integrity, hard work, transparency and accessibility. My personal life has been guided by the first three, and my political life will be further guided by the last two. Most of my friends have been friends since elementary school.

“I am loyal and trustworthy and pretty straight-forward. There is never very much doubt as to where I stand on any given issue. I never ask anyone to do anything that I would not do myself, and I am not afraid to get my hands dirty.”