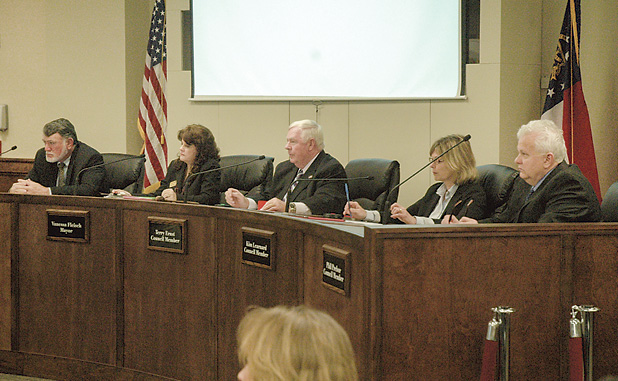 The Peachtree City Council on Feb. 4 approved a Memorandum of Understanding (MOU) with Newnan-based NuLink that will provide Internet broadband service to city facilities. The cost of the NuLink service was significantly more cost-effective than would have been the case if the city got into the broadband business.

City Manager Jon Rorie during a discussion on the broadband issue recommended that the council approve the NuLink proposal for 1.5 gigabit per second (gps) totaling $92,500 per year for five years. The cost for the city to establish its own broadband network would have been $437,000 per year.

Meetings with AT&T revealed that 1 gps or more of broadband would cost the city $1.7 million per year while that service with Comcast would cost $458,844 per year.

A legally-binding agreement with NuLink is expected in the coming week.

The NuLink contract will have options to renew after the initial 5-year term, with pricing to be determined based on future city capacity needs and wholesale costs of Internet service.

Council members prior to the regular meeting met as the city’s Public Facilities Authority, approving an authorizing resolution to move ahead with the city-owned project if the agreement with NuLink, prior to the signing of the legally-binding document, were to reach an impasse.

The authorizing resolution was continued by a council vote at the regular meeting as a result of the decision to go with NuLink.

The city currently pays NuLink $44,000 per year for 100 mps (megabit per second) service and, under a previous pricing structure, would have paid $87,000 per year to go to 250 mps service if maintaining service with NuLink.

There is another expense totaling $73,000 per year for five years for switching and other needed equipment to establish broadband service. That expense would have been required for the city to operate its own network. That expense will be funded through the city’s PIP (Public Improvement Program) budget.