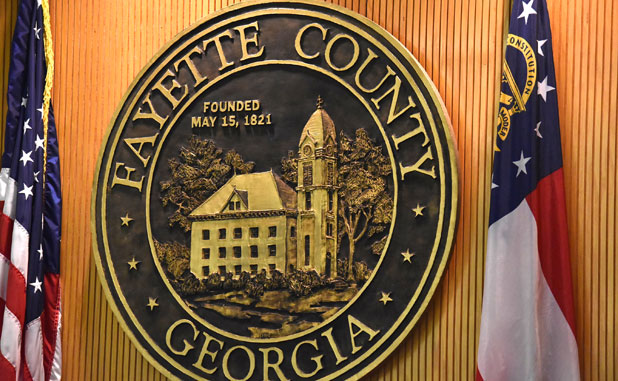 An issue that normally would be as straightforward as one could imagine for the Fayette County Board of Commissioners launched a lengthy discussion with no resolution at the Jan. 28 regular meeting.

The commissioners do not have direct oversight of the county’s Board of Elections, but the law requires them to vote on the acknowledgement of nominees to that board and complete the process for filing certification at the state level. The three-member election board includes one member each nominated by the county’s Democratic and Republican parties as well as one appointee from the Board of Commissioners.

The certificate of approval for Darryl Hicks to be reappointed as the Democratic Party nominee was granted by a unanimous vote with no discussion. His new four-year term began Feb. 1 and will expire Jan. 31, 2020.

The Republican nominee process was not as simple. The nominee in question was Aaron Wright, who would serve the same term dates as Hicks.

Chairman Charles Oddo said he was not comfortable with casting a vote “without an official letter” from the county GOP. He noted there was a letter dated Jan. 20 on the party’s letterhead announcing Wright, but the board had also received a separate letter from some party members asking for another candidate, and that letter had been placed on the dais the day of the meeting. That name was not mentioned during the discussion.

“There is some disagreement within the party right now,” said Oddo.

Commissioner Steve Brown stressed that he didn’t want the board “managing a political party,” adding that the members have their own recourse if they are not satisfied with their own process.

“If they want to duke it out, they can duke it out in Superior Court,” said Brown, noting that such action had just recently taken place.

Brown also noted that the Republican Party officials had given them detailed lists of the actual votes taken by specific voters according to precinct. “I don’t know how we can say that’s not legitimate,” he said, adding that delaying this vote could impact the party’s effectiveness in light of qualifying for 2016 races scheduled for March.

“I see no urgency in letting them have two more weeks to determine this among themselves,” said Oddo.

The chairman was unmoved when Wright addressed the board in person, referring to himself as the “clear” nominee of the Fayette County Republican Party. Wright said 31 total precincts were heard from in the vote, which he won 22-9.

“You have a letter on the dais signed by the chairman of the Fayette County Republican Party,” said Wright, adding that party officials were informed by county staff that everything was in order in comparison to how the Democratic Party submitted their paperwork.

There is no county committee meeting scheduled before the next Board of Commissioners meeting, Wright noted.

Oddo held firm on his stance and made a motion to table the matter until Feb. 11. That motion passed 3-2 with Brown and Randy Ognio voting against.

In another matter concerning the Board of Elections, County Attorney Dennis Davenport informed the commissioners of a legal issue requiring their consideration. A couple of years ago the board voted to defend election board Chairman Marilyn Watts in a suit seeking her removal from that board. She was victorious in that action, which according to Davenport means the commissioners have the option of seeking attorney fees, which in the county’s case amounted to some $58,000.

Davenport said the county could file to seek that relief from any or all of the plaintiffs in the case: the county GOP, Scott Fabricius and attorney Richard Hobbs. The board has until Feb. 15 to make such a filing in court should it decide to do so.