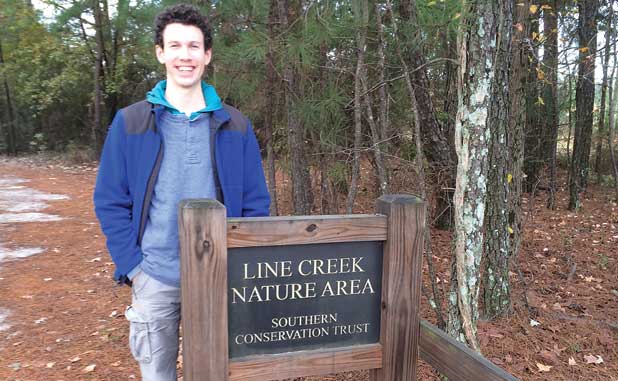 Sharpsburg Eagle Scout Sean McCarthy from Boy Scout Troop 2193 has completed his latest project at the Line Creek Nature Area in Peachtree City and is on the way to earning the Hornaday Silver Medal, scouting’s most coveted award.

McCarthy is in the final stretch to earn Boy Scouts of America’s most difficult and most coveted award, the Hornaday Silver Medal, by contributing to the Line Creek Nature Trail. The Hornaday awards, founded in 1914 by Dr. William T. Hornaday, reward Boy Scouts who conduct service projects in the areas of conservation and environmental stewardship.

“Sean began his quest at age 14, while earning his Eagle Scout rank and simultaneously the Hornaday Badge, which is the first component of working toward a Hornaday Conservation Medal. BSA National states it takes three service projects in categories a variety of categories like Forestry, Soil and Water, Fish and Wildlife, Environmental Science and Public Health, to qualify to receive the Hornaday bronze medal and four projects for nomination for a silver medal,” said Sean’s father, Jim McCarthy. “All four projects go before the BSA national conservation committee for approval. The process takes years but must be completed before the scout turns 18.”

“Sean recognized after a visit to Line Creek that the greatest conservation issue was to tackle the soil erosion problem caused by the social trails and deforestation that leads to runoff water pollution,” said Larson. “After attending a trail construction workshop, conducting considerable research into best practices at other parks and consulting with his project advisor, Denise Chase, he made a comprehensive project proposal employing multiple strategies to address soil erosion in the park.”

McCarthy led fellow scouts and friends in the project at Line Creek Nature Area. The project dealt with a number of needed soil and water conservation service issues.

Sean is an Eagle Scout with 13 Eagle Palms, a Junior Assistant Scoutmaster, a Leave No Trace Trainer, a Wilderness First-Aid Responder and is a recipient of the BSA National Medal for Outdoor Achievement. He is currently completing his 100th merit badge and last year received the Presidential Award for Environment Stewardship.

“The Southern Conservation Trust is thankful for Sean for volunteering to organize and lead this significant community service conservation project at the Line Creek Nature Area,” Larson said. “We see the long term positive benefits of his project will lead to a better visitor experience with an improved forest habitat and a cleaner river environment.”

“The trail consultant reviewed the existing trails, erosion problems and visitor behavior to recommend specific trail closure, construction and control measures including adding trail signs,” Larson said. “As a result of this survey, the Mule Rock trail was constructed and several social trails closed as an Eagle Scout service project in 2010. However, the social trails closed using only natural materials scattered over the ground were reopened over time by visitors. Erosion has continued on the Ridge trail because no water bars were installed on the Ridge trail.”