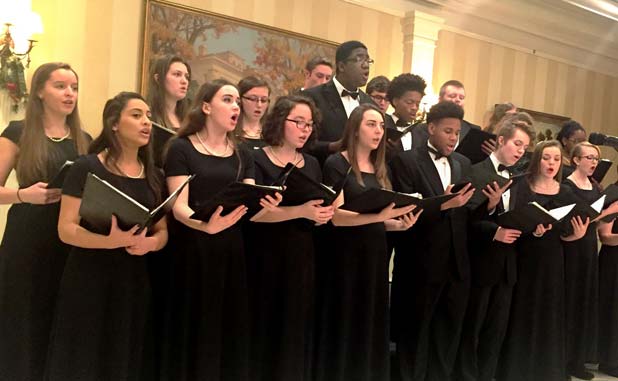 They were the among the first of 24 choral ensembles invited to perform for visitors to the mansion’s 2015 Holiday Tour Season, which takes place from Dec. 7-18, Jackson said.

After a photo with First Lady Deal on the front steps of the mansion, the ensemble performed in the mansion ballroom for 45 minutes that morning, under the direction of chorus teacher Denise Meacham, said Jackson. The students enjoyed cookies and apple cider afterward.

The students from Smokey Road were not the only ones to get in on the action. East Coweta High School’s Chamber Choir also performed at the Governor’s Mansion celebration on Dec. 9. In total, 23 East Coweta chorus students, grades 10 through12, performed under direction of director Christy Hauert.

“We were honored to be a part of the festivities and enjoyed meeting Georgia First Lady Deal,” said Hauert.

Jackson said both performances were part of the Governor’s Mansion Holiday tours. Invited choral and instrumental groups from schools around the state perform for visitors during the tours of the historic home.