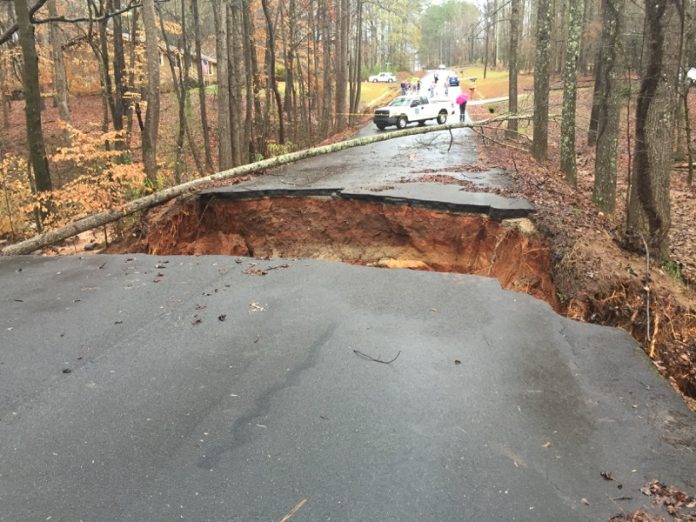 Fayette County Fire and Emergency Services (FES) Deputy Fire Chief Tom Bartlett said approximately 60 homes in the Chanticleer subdivision were affected after a portion of Canterbury Lane washed out. Water lines in the subdivision were also down due to the weather.

Bartlett said there were no injuries associated with the wash-out.

Repairs to the roadway will assessed over the weekend due to flood water not expected to crest until later in the day on Christmas, Nelms said. Repair work on Canterbury Road is a priority, said Nelms.

Meantime, a neighbor on nearby Wyonia Way is providing access to Hilo Road for stranded residents through her property, Nelms said, adding that Fayette County Sheriff’s deputies on Christmas Eve installed detour signs to assist motorists.

Nelms also commended the Fayette County Public Works Department and private contractor Brent Scarbrough for the significant work on the water lines performed as a result of the wash-out.

Nelms said a portion of McBride Road became impassable on Christmas Eve, requiring a temporary barricade until needed work can be performed.