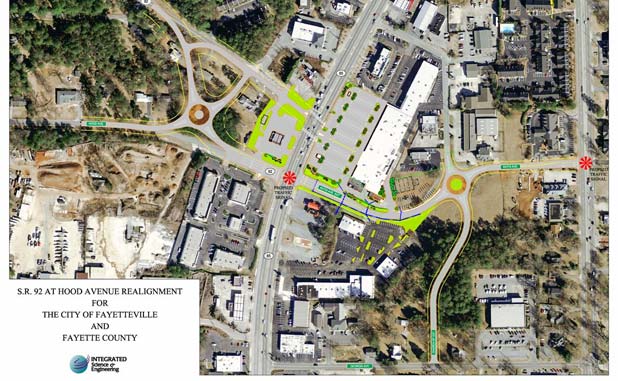 After years of planning, the city of Fayetteville’s long-awaited traffic fix for the Hood Avenue and Ga. Highway 92 intersection is finally ready for its close-up.

During Thursday’s City Council meeting, the city is expected to approve the budget adjustments that will totally fund the project. In 2010, the project was estimated to cost $8.25 million, but has now increased to $9.9 million.

A big part of the fix is the addition of a roundabout to the west of the existing BP gas station, along with moving the traffic light on Hwy. 85 southward from the current Hwy. 92 intersection a few yards south to the existing non-signaled Hood Avenue intersection.

The project also includes a new access road to the east of the intersection that would allow traffic to reach Kathi Avenue at a new roundabout to replace the current three-way stop and ultimately Jeff Davis Drive.

The eastern leg would also allow for a connection southward to Church Street to provide better access to the Fayetteville Post Office.

The city is expected to award the bid at its Dec. 17 meeting and have a groundbreaking before the end of the year. The estimated construction timeframe is 18 months.

In other news to be considered Thursday night, the council will:

• Consider the second reading of the new boundaries for the Tax Allocation District. Following this year’s annual council retreat, the City Council directed staff to explore ideas for further development of the downtown district.

Through this process, other parcels adjacent to the current TAD boundary have been identified that would benefit downtown development efforts in the city if they were included in the TAD.

The TAD is comprised of properties within the downtown historic district and the surrounding area with redevelopment/infill potential that border the city’s main north- south thoroughfare, Glynn Street, select properties along two main parallel east-west roads, Lanier Avenue and Stonewall Avenue, as well as Church Street, which runs north-south north of Lanier Avenue.

• Consider a rezoning request for a nearly 34-acre tract located on Ga. Highway 54, near Yorktown Medical Center. The property would be rezoned from C-3 (Highway Commercial) to MO (Medical Office).

• Consider a rezoning request for a 19-acre site at Promenade Parkway, across from the Fayette Pavilion. The applicant wants the property rezoned from C-3 (Highway Commercial) to M-1 (Light Manufacturing) to develop an industrial park.