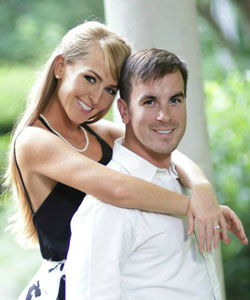 Mr. and Mrs. Thomas Stanley Zaworski of Fayetteville announce the engagement of their daughter, Eryn Elizabeth, to Elijah Jay Carroll of Jackson.

Eryn is the granddaughter of Mr. and Mrs. Thomas E. Zaworski of Senoia and the late Mrs. Mildred Little Holmes of Austell.

She graduated from Fayette County High School in 2006. Eryn attended Brenau University where she played soccer, was a member of Phi Mu Sorority and graduated with a bachelor’s in business management. She is also a 2014 graduate of Emory University where she pursued legal studies. Eryn now works as contract administrator for Stibo Systems.

Elijah is the son of Pat and Laurie Carroll of Jackson and the grandson of Dorothy Janczak of Milwaukee, Wis.

He graduated from Jackson High School in 2002. Elijah holds a bachelor’s degree in business from the University of North Georgia where he was also a cadet and a member of Kappa Sigma Fraternity. Elijah also successfully completed Army Ranger School in 2012. Currently Elijah is a captain for the 1-108th Cavalry, 48th IBCT, Georgia Army National Guard.

The couple will be married at Montaluce Winery in Dahlonega in April. They will honeymoon in Antigua.