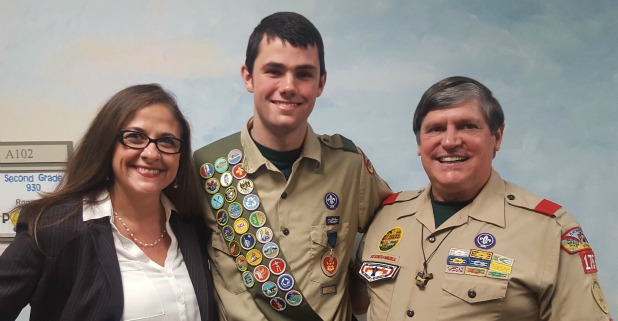 He is a member of Troop 175 in Peachtree City and a senior at McIntosh High School. His scouting career began in 2005 as a Tiger Cub in Cub Scout Pack 110 in Sierra Madre, Calif.

After earning the Arrow of Light in March 2009, Nathan and his mom, Kerri, moved to Peachtree City where they joined Troop 175.

While in scouting, he experienced the high adventure base at Philmont Scout Ranch in Cimarron, New Mexico, where he and his crew spent 10 days hiking 60+ miles.

Nathan’s Eagle Scout project benefited the children’s ministry at First Baptist Church of Peachtree City, where he is an active member of the youth group and volunteers his time each summer for mission trips and Vacation Bible School. He built three wooden cabinets which will house the children’s ministry’s new touchscreen monitors used to check in the children and parents.

He spent three weeks in France this past summer as an exchange student and has hopes of backpacking through Europe in the summer of 2016. He has spent the past four years on the McIntosh High School debate team and has served as staff writer for the McIntosh Trail.