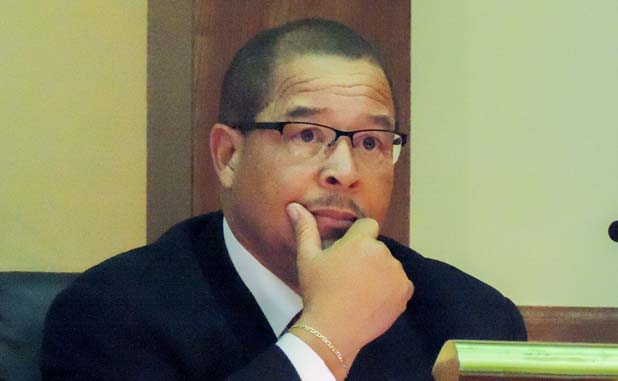 Just 48 hours after his historic election as the first ever black mayor of Fayetteville, Ed Johnson said he was surprised at current Mayor Greg Clifton’s comments during last Thursday night’s City Council meeting.

“I have to say I was offended by the comments about my church. He simply does not know how the African-American church works,” Johnson said.

Clifton said the fact that Johnson has added fewer than 100 members to his church in 12 years on the job is not what he would consider exemplary leadership.

Johnson retired as a navy officer and has been the pastor of Flat Rock A.M.E. Church since 2003.

“For Clifton to judge does not show the type of leadership we need in this city,” Johnson added.

Johnson has lived in Fayetteville for 20 years and ran on a campaign of experience and integrity, and won a narrow victory over Clifton.

Less than a week after the election, Johnson said he wanted to thank all the people who believed in him and helped support his campaign.

“I think citizens across the spectrum decided my leadership is what we needed,” he added.

Johnson also addressed the issue of being elected in an at large election, instead of the district voting controversy that has embroiled the county commission race.

When asked if his election disproves the NAACP’s claim that a black candidate can’t get elected at large, Johnson said some people were going to see whatever they wanted, but he said he has a better impression of the county’s electorate.

“The intelligence of the voter will lead quality candidates to be elected, whether it’s at large or district voting,” he said.

Looking ahead, Johnson attended the town hall meeting looking at the future of Fayetteville’s downtown area. He agrees the area needs to grow, but also want to see any vacancies in the area also filled. He suggests the way to keep the city moving forward is to get more people involved.

“I want to see more citizens and small businesses get involved with government,” he added.

Johnson said he spent his career in the military helping to develop strategic plans, and his military background will help him steer the city. Johnson was backed in his campaign by elements of the prior regime that governed Fayetteville before Johnson’s first election in 2011.

Johnson said people should not worry that the “old guard” could heavily influence the newly-elected slate of candidates.

“I’ve talked to Harlan (Shirley) and Kathaleen (Brewer). Both of them have their own opinions on how things run,” he said.

Johnson will conduct his first meeting as mayor Jan. 7.