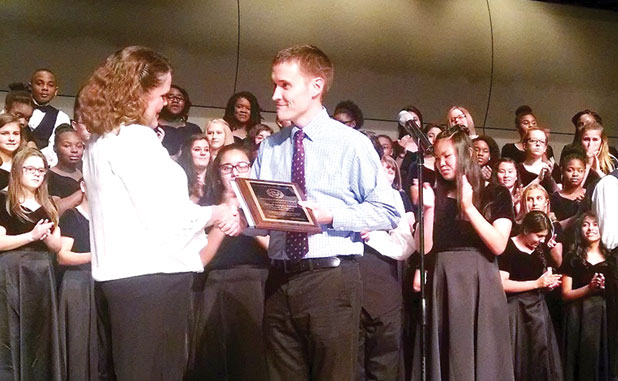 The Arnall Middle School Chorus has received the highest honor awarded by the Georgia Music Educator’s Association (GMEA). The chorus on Oct. 27 was awarded the 2015 Exemplary Performance Award at a ceremony at the Centre for Performing and Visual Arts in Newnan.

“To be eligible for the award, the choral program must have chorus students participate in all GMEA-sponsored events throughout the year, must receive a ‘Superior’ rating at the Large Group Performance Evaluation in both concert performance and sight reading categories, must have students who are selected for the Georgia All-State Chorus and must have a significant number of students to receive ‘Superior’ ratings in the solo and ensemble performance evaluation,” Jackson said.

Jackson said the Arnall chorus was presented the award over all other qualified applicants, recognizing the choral program for outstanding performance in all GMEA-sponsored events during the 2014-15 school year.

“Superior programs of the caliber of the Arnall Middle School Chorus are not the norm,” Miller told audience members at the ceremony. “They are the result of high expectations on the part of the directors and students, and their dedication to musical excellence.”

The Arnall Middle School Chorus has been under White’s direction for the past eight years.

“When I came to Arnall Middle School, we adopted the chorus mission, ‘Committed to Excellence’ and immediately began to set higher expectations for our choral groups,” White said as she accepted the award. “Since then, the students have grown tremendously in their musical ability and their work ethic. It is nice for them to see that when you work hard, your efforts will be rewarded.”

Miller also said that the excellence of Arnall’s program exists because of the support of parents and the school’s administrators.

“So I thank each of you for realizing the importance of music education in the life of these students,” he added, addressing parents in the audience.

The Arnall chorus’ Oct. 27 Concert won’t be its last of the year. The chorus’ annual Christmas Concert will be held on Tuesday, Dec. 8, at Heatherwood Church at 7 p.m. and will feature all Arnall chorus groups during the performance.