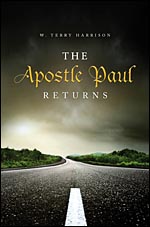 He will also appear Oct. 31 from 1-3 p.m. at HoneyBaked Ham Company, 244 Newnan Crossing Bypass in Newnan.

Here is a summary of the book:

“The Apostle Paul is invariably placed on a pedestal. For two millennia, he has stood the test of time as a genuine hero of sorts. Christians have always known him as a man of almost overwhelming influence, a man of supreme intellect, and one wholly undaunted by challenges and threats. But ought he to stand on a pedestal?

“Secularists over the centuries, on the other hand, have denied his authority. They ridicule what it is he has to say, refusing to believe that he had any divine authority at all. And they do so today! Many totally discredit the apostle.

“It is true: Paul, called Saul prior to his conversion, was like all the rest of us – a profound sinner, one who enjoyed the attractions of his world. He was always at war with sin personally, and must remain in our imagination as one of us – weak in the flesh, incurring doubts, wary of challenges. Paul admitted his struggles. Nevertheless, however, is he not our model for overcoming the world and its diverse attractions? Certainly, he has clearly demonstrated by his life and writings that he has always been a man of great faith and hope though living within the context of an evil empire. He provides each of us the wherewithal to live and love as God wishes us to do.”