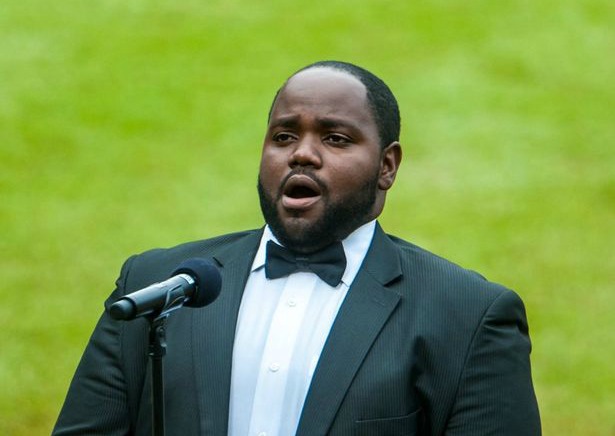 Atlanta Braves fans will see a familiar face and hear a familiar voice in the upcoming production of “The True Story of Cinderella” Oct. 24 at Newnan’s Wadsworth Auditorium.

Playing the Second Hermit in this new fall production from Newnan Cultural Arts Commission will be Timothy Miller, known for his renditions of “God Bless America” during the seventh-inning stretch at Sunday home games and holiday weekends.

At the bottom of the seventh inning one man dressed in a tuxedo appears just outside the Braves dugout, standing among the players in clay-stained uniforms. On the video board a recording of players reciting the intro to “God Bless America” begins … when the final one is played, Miller with his classically trained voice begins singing the patriotic tune that the late star Kate Smith made famous. It is also the song that was regularly a part of games at New York ballparks after 9-11 and spread through the rest of baseball.

“It fires you up, makes you want to go out there and play really hard. You know he’s doing his job as best as he can, and we want to do the same, too,” Braves first baseman Freddie Freeman was quoted as saying in a recent article about Miller’s performances in the Atlanta Journal Constitution.

“One of the best voices I ever heard. We get excited hearing him,” added Braves manager Fredi Gonzalez.

The tenor early in high school in his hometown of Augusta decided he wasn’t cut out for serious athletics. But he has become every bit an important part of the Braves with his patriotic flourish.

Miller is an adjunct professor of voice and music at Morehouse College. He and his wife and children make their home in Atlanta, where he has also wowed crowds with “O Holy Night” at the Thanksgiving Macy’s Great Tree Lighting at Lenox Square.

His vocal talents have brought Miller to some impressive places. The youngster who began with hymns at his father’s church later sang “Ain’t Got Time to Die” at Coretta Scott King’s funeral, sang the National Anthem and “To God be the Glory” at Nathan Deal’s 2011 inauguration, toured Europe doing “Porgy & Bess” and has appeared in numerous operas, many with the Atlanta Opera company. He once did a promo for The Cartoon Network, in which he sang the network’s lineup to the tune of “O sole mio.”

Miller was one of eight performers the Atlanta Opera sent to the Braves to try out for the job in 2010. What he won was the largest audience for which he would ever perform.

“The power of the human voice can touch people, whether it’s singing ‘God Bless America’ or in the opera house,” Tomer Zvulun, the Atlanta Opera’s artistic director, told the AJC.

“The No. 1 thing I try to relate to all of my students: If you give of yourself through your sound, people will feel it,” Miller said. “People always come up to me and say they got really emotional when I sang, or that I gave them goose bumps. And that’s because I’m sending out vibrations that the audience feels. It connects us on a very human level in that you feel the same thing I’m feeling when I’m singing. It’s very cool and moving.”

Tickets are now on sale for the 7 p.m. Oct. 24 presentation of “Rags to Riches,” an evening of musical theater featuring Warren Martin’s “The True Story of Cinderella” at Wadsworth Auditorium in downtown Newnan. It promises a night of music and laughter for the entire family featuring 14 singers of international and local renown gathered by host and artistic director Courtenay Budd, soprano, who joins the cast as the Second Stepsister.

Budd has assembled a talented cast, including renowned soprano Indra Thomas of Atlanta who thrilled audience members in last spring’s Friends of Wadsworth concert here in Newnan. Thomas will take the role of the First Stepsister. There will also be a number of familiar names from the Newnan and Coweta area.

Budd became acquainted with Warren Martin’s voice version of Cinderella as a student at Westminster Choir College in Princeton, NJ.  Martin (1916-1982), a Westminster Choir College graduate and longtime faculty member, wrote “Cinderella” for the annual May Day Celebration. He insisted that the work be sung not staged but “oratorio style,” that is, with the singers in a row across the front of the stage, facing forward, not playing to or looking at each other. Adhering to his advice does indeed make for greater hilarity, since there is nothing to distract from the humor inherent in the music and lyrics.

Budd earned a master’s degree at Westminster, where every fall the freshmen are welcomed with a special performance.

“They walk into Bristol Chapel and find it full of upper-classmen all a-buzz with excitement, like the energy in a theater where ‘The Rocky Horror Picture Show’ is about to start,” explains Budd. “The Voice Faculty enter the stage all serious, dressed up in gowns and tuxedos, and line up on the stage as if they are about to deliver a sacred oratorio … What follows is 55 minutes of singing hilarity.”

Martin’s comic oratorio “The True Story of Cinderella” will be preceded by a brief first half of musical theater and operatic excerpts on the theme of  Rags to Riches from composers including Gershwin, Bernstein, Puccini, Menotti and Rossini.

William Lewis of New York City is pianist and music director, and the production will include special guests Sarah Taylor and Kathleen Duncan, sopranos; Joan Kinrade as the narrator, and a special appearance by Newnan Mayor Keith Brady, on the chime.

Efforts have been made to keep ticket prices as reasonable as possible for this city-sponsored event. Cost is $20 general admission and $15 for students and seniors over 65. Newnan-area outlets include the Coweta Convention and Visitors’ Bureau and Let them Eat Toffee on the Court Square; at SouthTowne auto dealership on Bullsboro Drive at I-85; and at Matrix Insurance, in front of the Goodwill store at Thomas Crossroads, corner of Hwys. 34 and 154. Online ticket sales are through Brown Paper Tickets at brownpapertickets.com .

The Charles Wadsworth Auditorium is at 25 Jefferson St. in the former Newnan Municipal Building. Watch the Newnan Cultural Arts Commission’s Facebook page and City of Newnan website for updates.