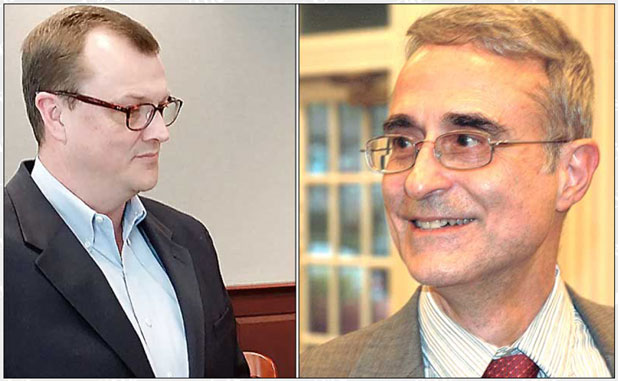 In the wake of a previous story in the Citizen about a possible settlement of the county’s district voting lawsuit and allegations of improper conduct during negotiations of that settlement, several of the parties involved spoke out again to clarify what was reported last week.

Commissioner Steve Brown, who suggested previously that Chairman Charles Oddo had been negotiating a settlement without the consent of his colleagues, reiterated that position in a letter to The Citizen dated Monday.

“I have reason to believe Chairman Charles Oddo was having settlement discussions with the plaintiffs in the lawsuit without the Board of Commissioners’ consent,” Brown wrote. “Previously, I asked in writing for the chairman to provide a written report for the commissioners and our legal team of any plaintiffs he had spoken to and detail what was discussed. To the best of my knowledge, nothing has been provided.”

Brown added, “It is important to note that executive session is not a protective shield from prosecution for illegal, unethical or improper activities.”

Brown told The Citizen last week that in a conversation with Dr. Barry Marchman, a member of the school board, he learned that fellow school board member Leonard Presberg said it appeared the county was preparing to settle the lawsuit. Presberg later disputed that statement and said Brown “misconstrued” that conversation.

“Even though Mr. Presberg and I differ greatly on political ideology, I have always found him to be open and honest about his positions, so I apologize for mentioning him in my conversation with the reporter if he says he did not discuss a settlement with Dr. Marchman specifically,” Brown stated.

Presberg went on his own blog to clarify his position.

“I haven’t spoken personally with Chuck Oddo since the night the commission forced the Election Board to make the special election voting countywide. A decision that once again lost in court. I urged him at that meeting to settle. And I hope he’s met with the citizens and businessmen of this county who also believe in settling,” he wrote.

“But as far as I know the commission has decided nothing. A settlement in this case would require a public vote which they have not taken. Just like the school board would have to vote in public. I know of no secret negotiations. I am a defendant in this lawsuit. Any formal direct contact with another party would have to be through my attorney. I still strongly advocate for settling and hope the school board and county commission do soon.”

Oddo, who refused to comment last week citing pending litigation, did not move from that stance in his own letter to The Citizen dated Monday.

Citing the appearance of last week’s story on a possible settlement, Oddo continued, “I can’t speak for all commissioners, but I would hope that all commissioners continue to respect the protocol of not commenting on pending litigation while observing the duty of confidentiality of executive sessions.”

Oddo addressed Brown’s suggestion that the chairman attempted to convene a special called meeting without him.

“I as the chairman have the authority to call a meeting of the Board of Commissioners. Any two commissioners share that same authority,” Oddo stated. “Since I have been chairman, no called meeting has occurred specifically to exclude any commissioner.”

Oddo called this episode “a perfect example” of why it is difficult to find good people to run for public office.

The Board of Commissioners regular meeting for this week was moved to Tuesday, Oct. 6, at 2 p.m. At press time nothing related to the district voting lawsuit was on the agenda.