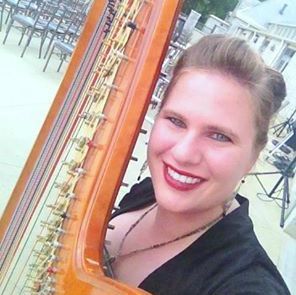 Harpist Ashley Collins, who recently toured and studied in India, will give a concert Saturday, Sept. 26, at 3 p.m. at the McRitchie-Hollis Museum, 74 Jackson St. in Newnan.

She has been performing harp for more than 13 years across the globe, from El Salvador to Ireland, Guatemala to India and across the U.S.A. She combines classical music with modern pop pieces, creating delightful programs that surprise and enthrall all of her audiences.

Tickets for the concert are $10 (plus processing fee), and are available at the museum and at eventbrite.com (www.eventbrite.com/e/harpist-ashley-collins-at-mcritchie-hollis-tickets-18440275360)

Last year Ashley spent six months touring throughout India, performing famous Bollywood numbers for a wide variety of Indian weddings, anniversary parties and corporate events. With guest lists of up to 8,000, Ashley thrived on the opportunity to introduce and share the beauty and elegance of the harp.

India is just one of many places that Ashley has been able to experience because of her harp. In 2011, she spent four months studying the Celtic harp and its history in Cork, Ireland where she was able to take lessons from the famous harpist and composer Lisa Canney who is a member of Celtic Crossroads, a musical ensemble that toured throughout Ireland and the United States. She has also played her harp on mission trips to El Salvador and Guatemala.

Ashley began her studies as a teenager and quickly began to show her dedication to learning the instrument. She traveled over 30 hours to Nashville once a month to take lessons from the esteemed Carol McClure. Through these interludes, Ashley was able to interact with other harpists of all skill levels. She became aware of the commitment it would take to become a wonderful harpist. She rose to that challenge and acquired a substantial scholarship from the highly regarded and famous DePauw School of Music where she spent five years earning two degrees, a B.M. in Harp Performance and a B.A. in Theatre Performance.

“I love the harp because of its beauty and the calming effect its music can have on its listeners,” she said. “I want to share the love of music I have with others and give them some of the joy that God has blessed me with.”