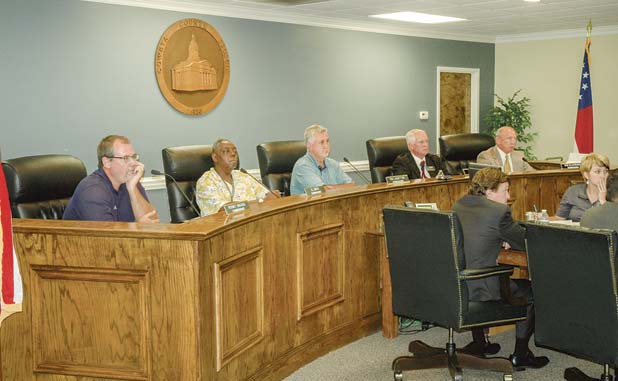 More than 100 residents attended the Aug. 25 meeting of the Coweta County Commission where the board voted unanimously to rollback the millage rate and the rates for the fire district and the fire bond.

Commissioners at the meeting heard the details of five possible millage rate options, with the first option providing for a rollback of property taxes. The large group of people filling the commission chambers, and numbering more than 100, attended to have their say and insisted that commissioners use the rollback option that would essentially neutralize the increases seen through property reassessments.

At issue was the increase that would have come with the fifth option, the one with the highest percentage increase to property owners.

The fifth option would have the incorporated millage rate moving from the rollback rate of 7.53 mills to 8.39 mills, an increase of .86 mills or 11.4 percent.

For the unincorporated areas, the fifth option would have been set at 7.25 mills, an increase of .92 mills, or 14.5 percent, over the rollback rate of 6.33 mills.

Commissioners were told that the fifth option would have addressed a number of issues, including providing additional staff for the sheriff’s office, public defender and district attorney along with items such as salary adjustments.

County Administrator Michael Fouts during the discussion noted that the Georgia Department of Labor requires that the highest option be printed in the tax increase notification. Responding to a question from Commissioner Al Smith, Fouts said the rollback rate would leave an $800,000 shortfall.

“If so, staff will re-work (the upcoming budget expected to be adopted next month,” said Fouts.

Twenty of those attending the meeting spoke during public comments that preceded the vote. Of those, two spoke in favor of the raising the rate while 18 spoke against it.

Speaking on behalf of the 900-member Newnan-Coweta Chamber of Commerce, Tony Ferguson cited Coweta’s pro-business environment. He said the chamber understands the need to increase expenses to provide services.

Another speaker, Daniel Barrett, was opposed to a milllage increase. Barrett said he and his wife are school teachers who are making less money today than they did 10 years ago due to increases in personnel costs. He asked commissioners to use reserve funds or find another way to cut costs.

Finance Director Hans Wilson responded to a previous question on the use of reserve funds, saying the county currently has approximately $15 million in reserves. The county is required to have two months of operating capital held in reserve.

When the pubic hearing ended it did not take commissioners long to have their say and take a vote. They unanimously adopted the millage rollback rate along with the rollback rates for the fire district at 3.08 mills and the fire bond millage at .42 mills. Pertaining to the mandated fire bond millage rate, it was noted that the .42-mill rate would leave the county short by approximately $100,000 since the account has no reserves. That amount will have to be made up from the general fund or from other appropriate sources.

The Coweta County Board of Education on Aug. 24 adopted an 18.59-mill tax rate. Though the rate has been the same for several years, maintaining the same rate was essentially a tax increase due to rising property values.

There were reportedly few citizens attending the school board meeting to advocate for a rollback.

For the school board to rollback the millage rate to account for high property values, the new rate would have been 18.08 mills.

The school system has no bond debt.