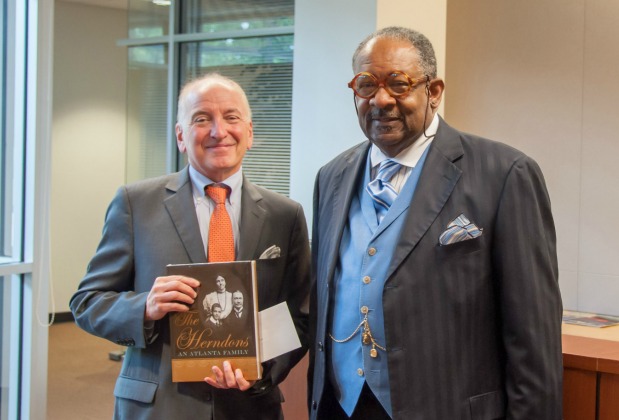 The University-managed scholarship is designed to assist undergraduate students pursuing a business degree who demonstrate academic commitment and excellence, financial need, character and leadership, and a personal understanding of the Herndon legacy. This gift will be used to create the Herndon Scholars Program. Students selected as Herndon Scholars will receive $5,000 per year for up to four years.

“We are grateful for the generous support of Clayton State students by the Herndon Foundation,” said Hynes. “We hope this is the beginning of generational development here of Herndon scholars, who, through hard work and an enterprising spirit, will model the success and the values found in the Herndon family.”

The mission of the Herndon Foundation is to increase the awareness and appreciation of the most prominent black family in Atlanta’s history. Born into slavery in Walton County and a one-time resident of Jonesboro, Alonzo Herndon (1858-1927) rose to prominence as an entrepreneur, philanthropist, and founder and president of the Atlanta Life Insurance Company, nationally one of the most successful black-owned insurance businesses.

Widely admired and respected, Herndon was known for his involvement in and support of local institutions and charities devoted to advancing business and life in the black community – an involvement the Foundation bearing his name carries on to this day, thanks in part to the efforts of his only child, son Norris Herndon.

In summation, the Herndon story exemplifies the merits of hard work and strategic thinking.

Founded in November 1950 by Norris B, Herndon, the Alonzo F. and Norris B. Herndon Foundation has been a major benefactor to religious, charitable, scientific, literary and educational metro Atlanta institutions and organizations since its inception.