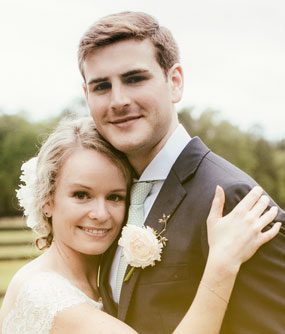 Rebecca Timmis, daughter of Dr. and Mrs. David Paul Timmis, and Theodore Malcolm Russell Jr., son of Mr. and Mrs. Theodore Malcolm Russell, were married on April 18th, 2015. The ceremony and reception were held at Pepper Plantation in Charleston, S.C.. Reverend Doug Farmer officiated the ceremony. Given in marriage by her father and mother, the bride was attended by her sisters, Jennifer and Nicole, as maid and matron of honor. Nicole’s three children, Jacob, Noah and Maggie were the ring bearers and flower girl. The best man was the brother of the groom, Nicholas Russell.

The bride graduated from McIntosh High School in 2004, from Washington and Lee University in 2008 and also received her MBA from The Wharton School where she was a Palmer Scholar. She is a currently a strategy consultant with Bain & Company in New York.

The groom is a 2004 graduate of Madison High School and 2008 graduate of Wake Forest University. He is a research analyst with Onex Credit Partners in New Jersey.

Jamie and Rebecca currently reside in Manhattan and are looking forward to a honeymoon to Italy in the fall.