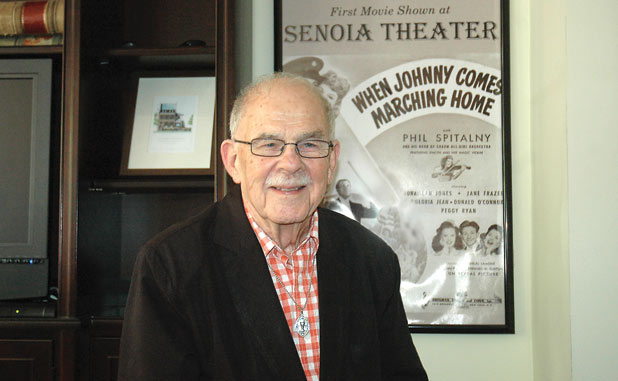 Former U.S. Army Private William Gatlin will be one of many veterans in Senoia on Memorial Day. Today, at the very young age of 90, Gatlin lives in Griffin and is remembered by many in the south metro Atlanta area, having taught English and French for many years at the former Russell High School in East Point. But Gatlin is also a World War II veteran who was wounded in action and captured in France just days after D-Day.

Gatlin graduated from high school in 1942 and registered for the draft when he turned 18. The World War II veteran was drafted in 1943 and spent the fall and winter in Fort Knox, Kentucky. Private Gatlin was sent for further training at installations in Maryland and New York and was subsequently stationed at a facility near Liverpool, England in the spring of 1944.

“I was in England until D-Day and I was in France five days after D-Day,” Gatlin said, adding that he was assigned to the 745th Tank Battalion and attached to the 1st Infantry.

A member of a reconnaissance platoon, ”We travelled across France. With my job as a scout, we went ahead as the German’s retreated.”

Gatlin said Army engineers would set up pontoon bridges after the Germans blew the bridges as they retreated. It was in September 1944 that he was at the Maginot Line in eastern France when his platoon came under fire.

“We were fired on from a machine gun nest in a hedgerow. We got in a recess on the side of the road. They sprayed the gully we were in,” Gatlin explained.

Gatlin was struck in his left thigh and was wounded in his left arm from a machine gun round that had ricocheted. Three others died along the roadside that day.

“We were all 20 years old,” Gatlin said, reflecting. “I wondered why I was spared.”

Cut off where they were positioned, Gatlin said he and another soldier were picked up by the Germans.

Gatlin was soon transferred to a hospital, though at that facility there was no bed so he slept on a mattress in the hall.

A Red Cross train arrived after a day and a night. Gatlin was on the train for a week and was the only American aboard. He said the tracks were bombed so the train had to take side-tracks to get to its destination.

“We went to a large German military hospital in Geissen (in central Germany). A German officer asked me if I liked Benny Goodman,” Gatlin said with a chuckle, indicating to the officer that he indeed did like Goodman’s music. “And he soon gave me a cigarette.”

While at the hospital, Gatlin noticed the difference in the treatment of certain prisoners.

“The Germans were nasty to political prisoners and ethnic groups, but they were not nasty to American prisoners. They were good to us,” Gatlin said.

Gatlin said one of the German administrators befriended him and brought his wife and son to visit the imprisoned American.

“I kept up with him for years (after the war),” said Gatlin.

But Gatlin’s journey as a prisoner was not over. He was transferred one night in November 1944 to a POW camp 30 miles from the Czechoslovakia border. Half the prisoners were British, with some of them having been in the camp since the battle at Dunkirk in mid-1940, he said.

“They had turned an opera house into a POW camp,” said Gatlin. “There were double-bunks on the stage and there were 500 prisoners there. We were there until the war ended in May 1945.”

Asked about how he was treated there, Gatlin said, “It was an interesting time. We tried everything we could to survive. They didn’t have food for us or them. The only meat was canned Spam.”

Ever looking on the bright side, Gatlin explained with another chuckle how he played bridge with a fellow prisoner from South Africa, how a local priest visited the camp to give Communion and how an Air Force choral director formed a choir for Sunday services.

Though conditions were dismal, Gatlin said mail would occasionally go through.

Things began to change at the POW camp as the final days of the war unfolded.

“One week before we were liberated, all our German guards left us. They disappeared. So we knew something was happening,” said Gatlin. “I don’t think they wanted to be there when our army got there.”

And then the day came and the war ended.

“The 12th Armored Division liberated us,” Gatlin said smiling. “And the Red Cross trucks came in, but we couldn’t take much food.”

The journey home came by way of Frankfurt, Paris, New Foundland and back to the U.S., with his last stop at a hospital in Atlanta where he was in a body cast for six weeks.

Once reunited with his family, Gatlin said his mother had tears in her eyes.

“We sat down that night and I told them what had happened,” he said, adding that he was not questioned about his experiences.

None the worse for the wear, and as an active and animated youngster at age 90, William Gatlin will be a guest speaker at the Senoia Memorial Day Remembrance and Festival.

Gatlin and the others veterans from all wars will be the honorary grand marshals in the Senoia Memorial Day Parade.