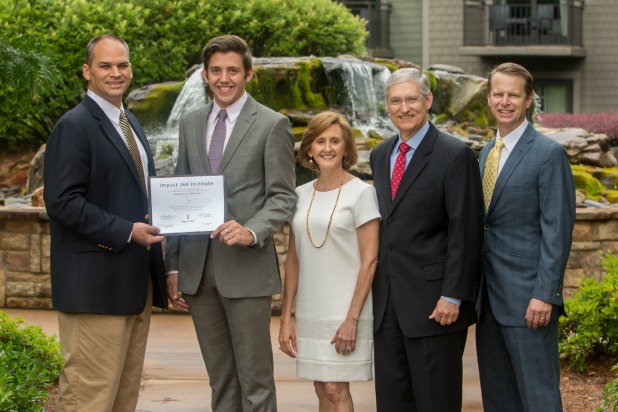 John Traeger was recently commissioned by Impact 360 Institute Gap Year, a program that prepares high school graduates to be Christ-focused servant leaders on their college campuses and change agents among their generation.

Impact 360 Gap Year is just one of several education programs under Impact 360 Institute, an organization resourced and supported by Lifeshape, Inc.

Traeger was one of 40 students who exhibited outstanding leadership potential and was selected to spend nine months on campus in Pine Mountain learning how to live and serve in biblical community. Gap Year students learn biblical worldview and apologetics in the classroom and spend time at Chick-fil-A headquarters in Atlanta, Georgia, learning the company’s SERVE model of leadership. They also participate in local service projects and partake in short-term mission projects in Brazil for a month of their Gap Year.

“Impact 360 Institute is proud of all of our Gap Year experience students,” said Dr. Phil Alsup, the Institute’s executive director. “They’ve been through a challenging nine months of academics. Now these exceptional young people are better equipped, grounded in their faith, and prepared with tools and training to take with them as they influence culture.”

Next fall, Traeger will be attending Georgia Tech pursuing a major in business administration and a concentration in finance. Outside of his interest in business, his ultimate goal is to get as involved on campus as possible so that he and others can enjoy the kind of Christian community he experienced at Gap Year.

“The best thing that I received from Impact 360,” he said, “has been living in community with a group of guys with whom I have developed great relationships and accountability for the future.”

He said that his faith has been tested and strengthened because of his time at Gap Year, and that he has flourished into a “biblical, active man with a firm foundation of faith and knowledge of Christ and a community of Christian brothers,” something Dr. John Basie, Gap Year director, says reflects the overall vision of the Institute.

Students commissioned by Impact 360 Institute are challenged to use the knowledge and experience gained from their Gap Year experience to stand firm in Truth on their college campuses and in the marketplace.

“We believe that education extends far beyond the classroom,” said Dr. Basie. “The rich experiences of Gap Year allow students to build upon a firm foundation that serves as a ‘jumping off’ point for the rest of their lives. We are very proud of John and his peers in this 2015 class of young leaders.”