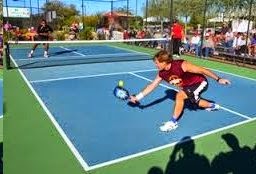 Pickleball will be coming Saturday, May 30, to Fayette County’s Kiwanis Park, 980 Redwine Road in Fayetteville.

Pickleball is a cross between tennis, badminton, and table tennis, played indoors or outdoors.  The simple rules of pickleball – invented by a Washington state congressman in 1965 named after his dog, Pickles – can be learned in a few minutes.

In addition to the physical part of the game, there is also very social, encouraging camaraderie during and after the game.  Most prefer regular doubles or mixed doubles. Tournaments are usually played in age groups encouraging equal opportunity for all levels of players.

Although people of all ages have played the sport locally, those over 50 have flocked to the sport because it involves a fair amount of physical activity but is not as hard on the body as tennis and racquetball. It is also very inexpensive to play since all that is required is a wooden or composite paddle twice the size of a table tennis paddle, a baseball-size wiffleball, and tennis shoes.

The USA Pickleball Association estimates there are more than 150,000 pickleball players in the nation and the number is exploding, leading to USAPA’s claim to be one of the fastest growing sports in America.

Harold Tenbrink of the Peachtree City Pickleball Club and Kenny Wallace of Fayette County Parks and Recreation will be the hosts for this event. Any inquiries or to RSVP, contact haroldten@comcast.net or kwallace@fayettecountyga.gov.