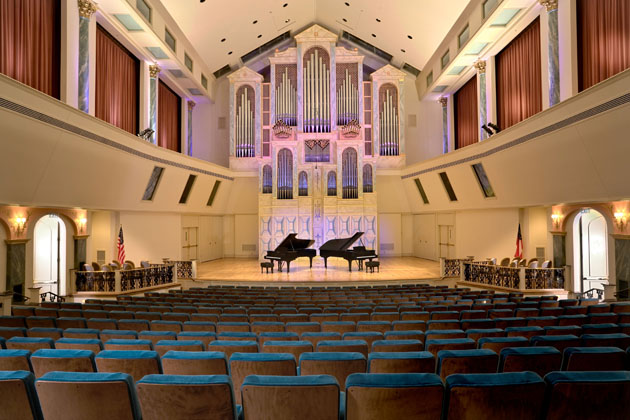 In addition to its summer camp, this year scheduled for June 8-12, Spivey Hall will present its Second Annual Summer World Music Festival, including seven performances by various global artists over eight weeks in June and July 2015.

“Summer is a wonderful time to experience Spivey Hall and the Clayton State University campus, especially for children and families,” said Melanie Darby, Spivey Hall’s education manager. “Concert goers can picnic by the lake before or after performances, and CSU’s biology department recently launched an Arboretum Tour mobile app that guides visitors through the diverse plant life around the lake. Concerts are priced to make them easily accessible to families, camp groups and senior citizen groups.”

Spivey’s Summer World Music Festival launched in 2014 with great success, as patrons of all ages attended the seven performances. This year’s festival again includes seven performances in June and July, taking place in Spivey Hall on Wednesday mornings at 11:15 a.m. Each week will present an instrumental or vocal artist or ensemble performing music that represents different regions and cultures around the world. The current schedule is as follows:

The Summer World Music Festival is presented as part of Spivey Hall’s Young People’s Concerts, providing individuals of all ages access to outstanding live performances. Artists featured during the Summer World Music Festival will provide study guides in advance of their performance that meet Georgia Performance Standards for curriculum connections in world history, geography, and music.

Tickets for Spivey Hall’s Summer World Music Festival are priced at $2 per concert in advance and $5 at the door, and are available for purchase online now.

Spivey Hall’s 6th Annual Summer Music Camp is a week-long day camp for students entering grades 4-7, scheduled for June 8-12. While the camp is based on choral singing, it strives to give campers a broad range of musical experiences throughout the week.

This year, the program adds tininkling (Polynesian folk dancing) and Kodaly games. These sessions join past favorites including piano lab, tone-chimes, and drama.

Campers will rehearse throughout the week and then share what they’ve learned during a demonstration concert Friday, June 12, at 2:30 p.m.  Craig Hurley, director, and Marcena Kinney, accompanist, of the Spivey Hall Young Artists along with several Spivey Hall Children’s Choir members will be acting as counselors.

Registration for Spivey Hall’s Annual Summer Camp is available online. – $160 by June 1 and $185 after that. Multi-child discounts are available.