Hopeful Primitive Baptist Church in the Hopeful Community of northeastern Fayette County was one of the first five churches formed in the late 1820s in Fayette County and, sadly, it has fallen into a bad state of disrepair. It has no members and property has been deeded to the community center across the street.

But there is always hope on the horizon.

At right, Bo Hill, returning from a Sons of the American Revolution event in Atlanta in full reenactor regalia, stopped by the church Saturday and lent his presence to the event. Photo/Dean Breest.

“Saturday, Jan. 4, was the start of efforts for 2014 to see this amazing icon of Fayette County saved, restored and preserved for future generations,” said Dean Breest, a member of the 1825 Committee to Preserve Hopeful. “Work was started at 9:30 a.m. and continued throughout the day until 3:30 p.m. Fayette citizens from across the county showed up individually and in small groups to work raking, cutting, burning, clearing and hauling off large truckloads of undergrowth and small trees from the church graveyard.“

Thought by some to have been built in 1825, the church sits on hand hewn beams. It is an impressive architectural, single room, 1,100 square foot structure that the committee (Mrs. Judy Chastain, chair) believe needs to be saved.

“As we cleared trees, vines, and undergrowth we were surprised at the number of graves that continued to appear,” Breest continued.  “Dates on the headstones that could still be read reach back to the very beginning of Fayette County.  Among the early pioneers of Fayette County who are buried here are veterans who served in the Revolutionary War, Civil War, World 1 and II.”

Below, volunteers from all over the county, as well as those from surrounding areas, showed up last Saturday to help rake, clear and burn debris surrounding the historic Hopeful Primitive Baptist Church and restore it to its former dignity as one of the first five churches in Fayette County. Photo/Dean Breest. 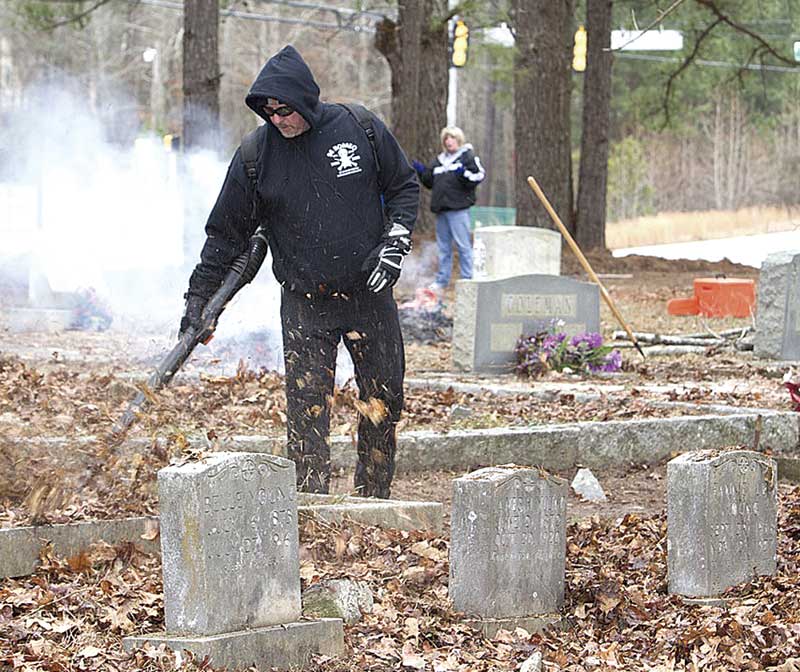 As  Breest and the others worked, an exclamation was heard among the group. “I do not believe my eyes!”  a volunteer loudly exclaimed.

Breest said he looked up to see a Revolutionary soldier emerging through the smoke.

“Wow!  What a sight to see,” he said.  “It was Bo Hill returning from a Sons of the American Revolution event in Atlanta.  A sense of wonder and amazement swept over the volunteers as he walked quietly across the sacred grounds paying respect to the Fayette County pioneers and veterans who are at rest here. When he walked out to the front of the church and stood guard cars slowed to a crawl.

The nonprofit Hopeful Community Center which is open to all Fayette citizens is responsible and holds deed to the 189 year old church, graveyard and grounds.  There are no paid officials and all work is volunteer.

“We seek your leadership and help as we try to move forward on the quest to restore and preserve this icon of Fayette County while paying respect to those early Fayette County pioneers,” Breest said.

Breest can be reached at Deanbreest@gmail.com.