Experience the sights and sounds of the Greatest Generation when the Commemorative Air Force (CAF) Dixie Wing hosts the tenth annual “WWII Heritage Days” April 27-28. The history festival will be held at the Historical Airpower Facility, Atlanta Regional Airport-Falcon Field in Peachtree City from 9 a.m.-4 p.m. both days.

The weekend will again feature vintage aircraft, period vehicles, guest speakers, education displays, demonstrations by reenactors portraying Allied and Axis troops and activities for school age kids.Local actors and singers from Twilight Theatre will impersonate 1940s celebrities and perform musical hits from the era throughout the weekend.Highlights include an opening ceremony recognizing local WWII veterans and a 1940s-theme hangar dance.

Ewoud Swaak, the Honorary Consul to the Netherlands for Georgia and South Carolina, will be the keynote speaker at the WWII Heritage Days Opening Ceremony.The theme of the program, Operation Market Garden: History and Legacy, will commemorate a battle in September 1944 when 40,000 Allied paratroopers attempted to liberate a series of cities, towns and bridges in Holland in an effort to shorten war.

Joining Swaak will be Bob Anzuoni, Director of the U.S. Army Signal Corps Museum and published author of books about the history of 82nd Airborne Division in World War II.Anzuoni will provide a historical overview of the battle.Maj Gen George Harrison, USAF, Ret. will serve as master of ceremonies.

The opening ceremony is expected to be one of the largest gatherings of WWII veterans in Georgia this year. Activities begin at 9:30am with a patriotic program by Peachtree City’s “Official Ambassadors of Song”, Music Alive!

2013 marks the first year WWII Heritage Days joins Spirit of ’45, a nationwide grassroots movement that celebrates a National Day of Remembrance in honor of The Greatest Generation.In 2010 Congress passed a resolution designating the second Sunday in August as “Spirit of ‘45 Day” to commemorate the anniversary of the end of WWII on August 15, 1945.

Bruce Gamble, author of Swashbucklers and Black Sheep: A Pictorial History of Marine Fighting Squadron 214 in World War II, will describe the exploits and accomplishments of the famous squadron.Award-winning aviation artist Marc Stewart will be displaying several of his WWII-theme prints.

Saturday evening will bring back the Big Band sound synonymous with the 1940s at “Keep ‘em Flying”, a hangar dance fundraiser featuring a 21-piece swing band.Proceeds from the dance offset the cost of WWII Heritage Days, aircraft preservation and “Education Through Living History”, the group’s WWII history program made available to schools and youth groups free of charge.

“WWII Heritage Days is a community celebration that will educate and entertain the entire family.” said Jim Buckley, CAF Dixie Wing leader.The event draws enthusiasts to Peachtree City from throughout the Southeast.

Sunday morning will begin with a jeep-top religious service familiar to millions of American servicemen during and since the Second World War.

Why turn a flying museum into a living history classroom? “Our goal is to honor the Greatest Generation, the men and women who won the Second World War.” explained Buckley.

Suggested donation for “WWII Heritage Days” is $5, children 5 and under free.“WWII Heritage Days” will be held rain or shine. Please no pets. Tickets for “Keep ‘em Flying” are $60 at the door. Reserved tables and group discounts available. All ticket sales final. For more information, please visit www.wwiidays.org or call 678-364-1110. 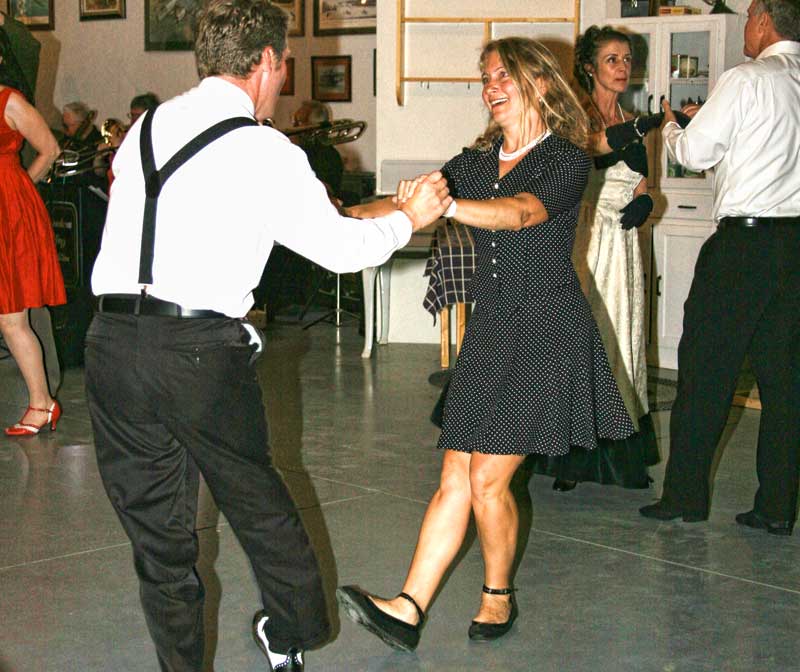 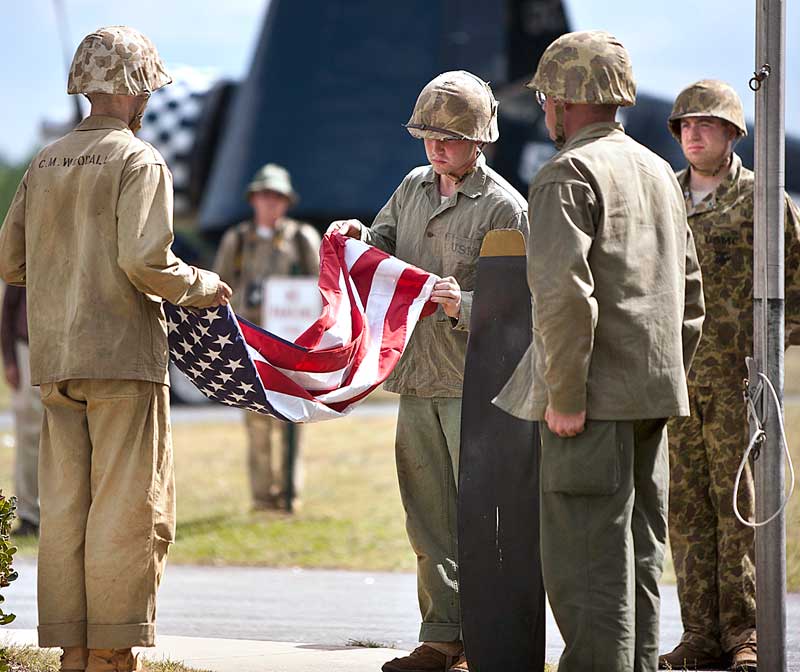 WWII reenactors honor Old Glory — As demonstrated above in last year’s closing ceremonies and lowering of the flag, historical reenactors from throughout the Southeast will gather in Peachtree City to recreate World War II by providing displays and demonstrations at the CAF Dixie Wing 10th annual WWII Heritage Days April 27 and 28, 9 a.m.-4 p.m. Activities will be held at the Historical Airpower Facility at Falcon Field. Suggested donation is $5, children 5 and under free. For more info, visit www.wwiidays.org/. Photo/Pam Ellis.