Still to come: Personnel cuts of more than 200 people — including 100 parapros — to close $15 million budget gap

The first of a series of two historic cuts to the Fayette County School System came Monday night at Sams Auditorium in Fayetteville.
After two recent public hearings, numerous discussions and a wealth of public comments spanning the better part of two years, the Fayette County Board of Education on split votes moved to close three elementary schools and one middle school at the end of the current school year.
At the end of June, Brooks Elementary, Fayetteville Intermediate School (FIS), Tyrone Elementary School and Fayette Middle School will cease to operate. For Brooks, the closure will mark the first time since 1919 the south Fayette community has not had an operating public school.
The closures are expected to save approximately $3.2 million of the $15 million in cuts needed to comply with state law and adopt a balanced budget in June.
The balance of those cuts will translate into 225 or more school system employees losing their jobs at the end of June.
The vote Monday night had school board members Mary Kay Bacallao and Barry Marchman voting to keep Brooks Elementary open. Bacallao lives near Brooks, while Marchman lives in Tyrone.
Voting to close the school were board members Bob Todd and Leonard Presberg and Chairman Marion Key.
The votes to close FIS, Tyrone and Fayette Middle, all taken separately, came on 4-1 votes with Bacallao in opposition to all the closures.
Each of the votes was preceded by a number of comments from board members explaining their rationale for the votes they were about to cast.
Todd and Key, as they had on previous occasions, noted the soul-searching and anxiety that comes with the idea of closing any schools. Beyond being a move unlike any other in Fayette County history, the decision to close a school is one that is based on economic realities and is one that no one wants to make, they said.
Board member Leonard Presberg echoed those sentiments in his comments, saying his responsibility is to the school system as a whole and adding that the board must make decisions based on the information they have rather than on what they wished the information would be.
Board member Barry Marchman in his comments prior to the vote on the closure of Brooks said there was a stronger case for leaving Brooks open even though it is a smaller school with fewer students. He spoke of unintended consequences that could accompany the closure such as tax issues or those relating to economic development on the county’s south side. Marchman said Brooks is a unique community in Fayette County and the absence of a school located there could prevent the area from growing.
Marchman voted to close  FIS, Fayette Middle and Tyrone. 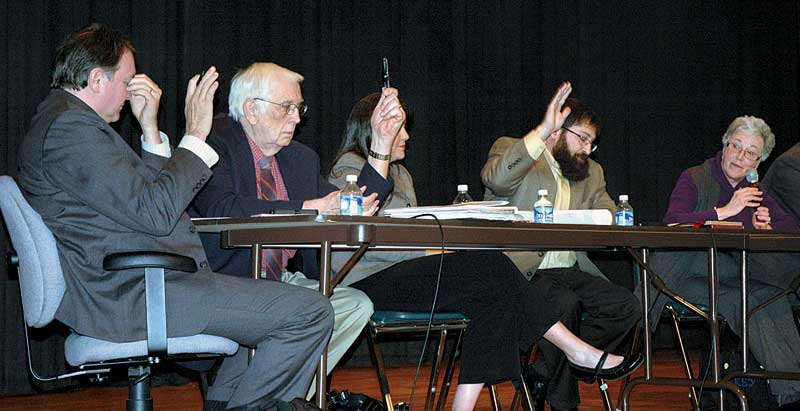 It was perhaps noteworthy that the audience in Sams Auditorium Monday night totaled approximately 350 people, more than attended the most recent public hearing on the closures but far fewer than the 900 people that attended the first public hearing.
And unlike public reaction at some of the previous hearings and at a number of school board meetings during the past year the audience was comparatively subdued, with most exiting the auditorium once the votes were taken and the school board had retired to executive session.
The meeting Monday night also came with no public comments. The absence of public comments at called meetings is customary. And except for a few rounds of applause during the closure comments by Bacallao and Marchman, the audience largely sat silent as the event they hoped would never occur unfolded before their eyes.
For some of the residents of Tyrone and Brooks, their attendance at board meetings began in the summer of 2011. And having attended many of the school board meetings since that time, those parents had advocated for leaving their schools open by using a nearly inexhaustible list of reasons and rationales for the board to consider.
Prior to the votes Deputy Superintendent Sam Sweat reported on recent meetings with planning department staff from Fayetteville, Fayette County and Peachtree City and with local business leaders and the Fayette County Chamber of Commerce.
Sweat said school system representatives were told by city and county planning staff that though there is a current up-tick in residential building permits the outlook is only for slow growth over time.
A part of the school system’s financial woes come from falling property values in the residential, commercial and industrial sectors that have seen Fayette lose approximately 20 percent of its value in the past three years. That is significant for the school system because it receives approximately two-thirds of the property tax dollars generated in Fayette County. In addition, the school system relies on property tax dollars for approximately half of its operating revenue.
Sweat said the meeting with the chamber and business leaders was one that solicited their opinion of the possible school closures. He said the majority at the end of the discussion said they supported the school board in making hard decisions, adding that they want to meet quarterly with school system representatives.
Sweat said the business leaders were also concerned about the potential for losing up to 100 parapros as part of the cost-cutting in personnel to save nearly $12 million once the school board begins the conversations that will lead to the most massive personnel cuts in Fayette’s history.
And Sweat noted the comments of Fayette County Development Authority CEO Matt Forshee at the meeting. Forshee said that the entry of the Pinewood Studio Group in north central Fayette would result in a slow growth process over time, Sweat reported.
Sweat noted that some residents during the public hearings had suggested that the arrival of Pinewood would generate a degree of significant growth in the short-term.
A statement issued Tuesday by school system spokesperson Melinda Berry-Dreisbach strove to put the historic school closure meeting in perspective.
“Closing schools is the last thing anyone wants to do, but the school system is facing at least a $15 million shortfall for next year. One step toward reducing costs is to right-size facilities to align with the student population. Other budgetary cuts will be presented in the coming weeks. Although challenging, these cuts are necessary for the school system to be fiscally responsible and meet its obligation to provide an excellent educational program for all students. The Fayette County Public School System is committed to maintaining the same standards of excellence that has made it one of the top performing school systems in the state and nation,” Berry-Dreisbach said.
Pertaining to the change in attendance zones due to the closures, Berry-Dreisbach said the proposed school attendance maps are posted on the school system’s website, www.fcboe.org. Adjustments to the previous maps were made following public input and the adjusted maps were presented to the board at the called session.
The board will take a final vote on the attendance maps at its regular monthly business meeting on March 18, Berry-Dreisbach said.
By far the largest of the historic cuts facing the school board is yet to come due to the need to cut approximately $15 million from the 2013-2014 budget that begins in July.
The board in coming weeks will have to decide on the extent of the cuts in personnel that could include up to 10 percent of the school system’s nearly 3,000 employees.
And even though previous boards cut nearly 300 other employees along with other expenses over the past four years, those cuts were not sufficient to offset the need to make even more drastic cuts this year.

Not a ‘my pleasure’ moment — 2 Chick-fil-A workers fight over...

Board of Education’s Presberg mocks dozens of citizen speakers live on...