I often read in this paper citizen criticism of Peachtree City’s police and fire organizations as being overstaffed, their budgets in need of a tighter trim. This is to offer a different perspective.

My 10-year-old daughter Kristen has an occasional seizure. On three occasions when she had a particularly bad episode, we called for the local ambulance and have been grateful for the response, even though a critic would ask why we also needed a fire truck and too many men in our living room while an EMT gave Kristen oxygen and checked her vital signs.

Trust me, when it’s your child, you’re glad they pull out all the stops just in case.

Last summer on June 2, 9-year-old Kristen was attending a summer camp at the Kedron swim center, a mix of sports and supervised swimming. I knew she was tired that morning so I stopped there early to pick her up.

As I drove up, I noticed a commotion at the side of the pool and thought to myself, “Surely that isn’t Kristen!”

As more people rushed over, the crowd parted just enough so I could see part of a child lying on the poolside cement while someone started CPR, and I caught a flash of the bright color of Kristen’s swimsuit.

I threw my truck into park where it was and rushed over along with my teenage daughter, Melanie.

The lifeguard, Kristen Mitchell, had pulled my Kristen off the bottom at about 4.5 feet depth.

Mitchell and Dave Wojcik, the camp director and an experienced EMT, were doing CPR, frantically looking for a pulse, trying to get a breath in response while I stood at her feet watching and waiting, counting every second.

If you are a parent, you know the freight train that was crushing my heart down to the size of a pea. A police officer arrived and tried her best to move me away but I was not going anywhere.

Finally, a pulse and a breath, but Kristen was still unconscious. Someone had called 911 and the ambulance arrived while a Life Flight helicopter landed in the Kedron Elementary parking lot.

The ambulance took me with Kristen up to the helicopter while I told them it was important for her to go to Children’s Hospital at Scottish Rite in north Atlanta where her records are, and where, incidentally, they are the very best treating kids with trauma.

I tried without success to go with her on the flight. While they quickly explained flight limits, it didn’t seem the time to tell them I had been a helicopter pilot myself and knew better, but I also know it’s good policy to keep potentially hysterical parents off a flight while the crew tries to revive a child.

By the time the helicopter took off for Children’s in north Atlanta, my wife, Julie, had arrived, and we drove north at somewhat normal speed since there was no need to complicate matters with a wreck.

When we arrived at the emergency room they were doing a test to scan her lungs, and she was still unconscious, waiting for an ICU bed to be prepared.

Cajun Rhodes from Peachtree City Recreation arrived with a tortured look, and when I told him Kristen was going to make it, his watering eyes told me what was in his heart.

Kristen awoke later that day and slowly regained her strength over a tough couple of days as Julie and I swapped off shifts, she taking nights while I took days.

Tests had been scheduled to look for brain damage from oxygen starvation, but cancelled when her alert responsiveness made those tests moot.

Still, her lungs had to dry out and she wasn’t out of the woods yet. Cajun Rhodes made the long drive to Children’s again, bringing Kristen a card signed by all her camp buddies. 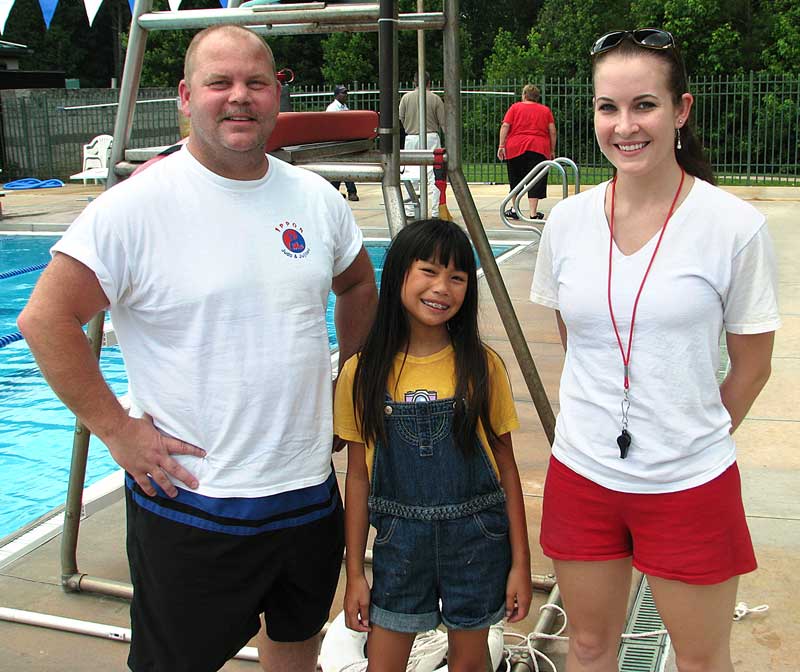 As usual, Kristen was a trooper, taking the many electrodes and IV sticks in stride, the nearest thing to a complaint being her deadpan question to a nurse, “Do I have to stay here all summer?”

Well, no, and three days later I took her home where she could rest and be monitored by Dr. Adcox nearby.

I gave lifeguard Kristen Mitchell and Dave Wojcik my personal thanks, but how do you express that level of gratitude? Last Thanksgiving and Christmas morning included special quiet thanks in our house.

I didn’t write about this nearly a year ago when it happened out of respect for another family’s anguish.

The day after Kristen’s incident, another Peachtree City nine-year-old girl drowned in a tubing group, caught unaware of the surge of a water release at the dam on the Chattahoochee River. I know that family’s pain will never go away, but I thought I would tell you now.

My family owes our thanks to Kristen Mitchell and Dave Wojcik, to the other Peachtree City Recreation staff, to Police Chief Skip Clark and his staff, to Fire Chief Ed Eiswerth and his staff. Words are not adequate to say it.

The budget questions will arise again, appropriately so, and some of the loudest critics (are you reading this, Mike?) are my dearest friends. I confess that I just don’t know what the staffing levels and budget amounts should be for Police and Fire Departments in Peachtree City, but I do know this:

I am grateful to have strong police and fire organizations here in our town, and if your family ever has a sudden need to dial 911, you may discover new meaning to that word I may have overused here – grateful.

[Terry Garlock occasionally contributes a column to The Citizen. His email is terry@garlock1.com.]