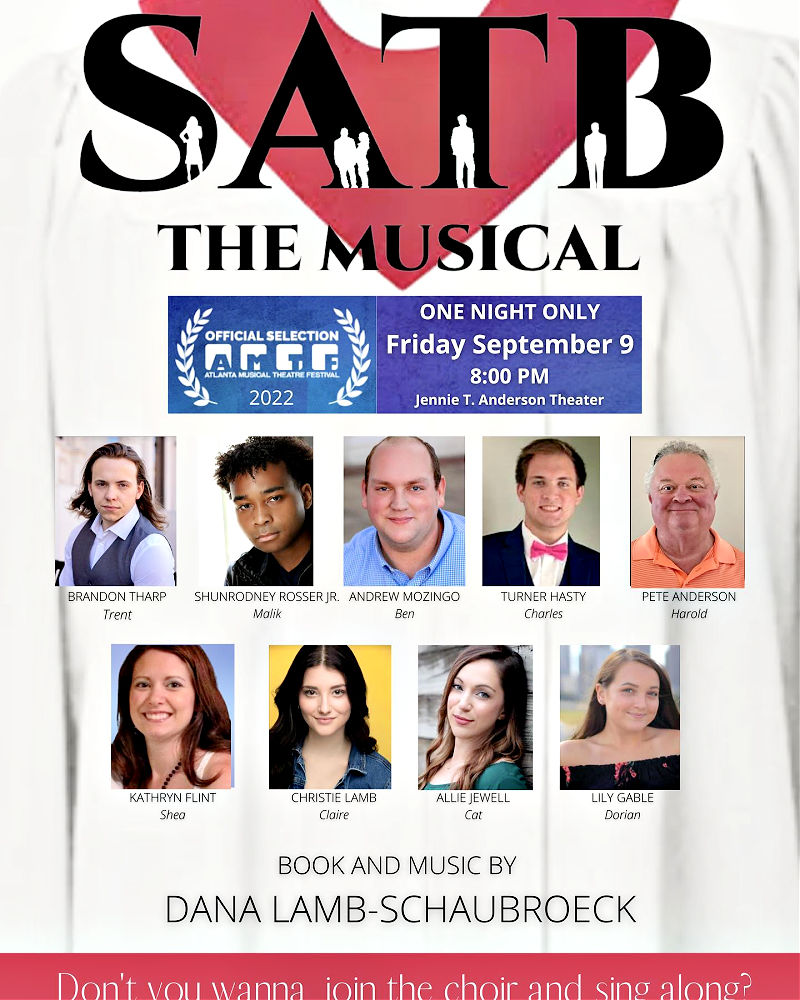 Four distinguished fine arts alumni of Fayette County schools are starring in the opening night return of the Atlanta Musical Theatre Festival this weekend. Three graduates of Whitewater High School as well as a Sandy Creek alumnus are playing top roles in the debut of SATB: The Musical, which opens this year’s festival Friday evening, September 9, at the Jennie T. Anderson Theatre in Marietta.

The musical, written and composed by music educator and songwriter Dana Lamb-Schaubroeck, was chosen as an official selection for the festival two years ago but the event was canceled due to the pandemic. The festival is relaunching for the first time in two years this weekend.

The show is about a young pastor and his wife who travel across the country to pastor a church that has recently gone through a split. At his new post, he meets the totally dysfunctional church choir and drama ensues. The Fayette County Alumni are among actors coming from Atlanta, Peachtree City, Macon, and LaGrange/Columbus in order to bring this show to life.

Shunrodney Rosser Jr., 2016 graduate of Sandy Creek High School, plays Malik in the production. Dana considers Malik’s character to be the strongest of the characters despite being the most misunderstood. Malik’s secret is revealed in the end of Act One, and it is these secrets which lead to opportunities for reconciliation and renewal. Shundrodney is a critical contributor to this show, according to the writer and composer, providing significant insight and development of Malik’s character.

“As writers, we need to make sure that the stories that we are telling accurately represent the people that we could never have context for. Malik’s character is far more dynamic, vibrant, and authentic because of Shunrodney’s brilliant insight and I am forever appreciative that he partnered with me to care about this one character as much as I do,” Dana says.

Rosser’s stage career at Sandy Creek High School included the role of The Prince in the musical Cinderella and the role of James “Thunder” Early in the musical Dreamgirls. He won the men’s category of Fayette Idol in 2018 and is currently attending Georgia State University, where he recently performed the role of Eggplant in GSU’s production of “Food Justice”. He also competed in and won first place in the Atlanta Black Theatre Festival Monologue Competition.

In this weekend’s production, he’s excited about displaying the vision that was given to Ms. Lamb when she created this play.

“It will be a joy showing that people everywhere, regardless of their differences, can come together through the Love Of God,” Shunrodney says.

Turner Hasty, a 2018 graduate of Whitewater High School, plays the role of Charles, who steps in with some comedic relief when emotions are running deep on stage. Charles simply adores himself as the charming, attractive, self-made man who relies on his grit and determination to be successful in business. Charles learns that everything you work for means nothing if it is never shared.

Turner’s prior roles included Pugsley in the Shuler Award-Winning production of The Addams Family at Starrs Mill High School and as Smee in the inaugural cast of Peter Pan Jr. in New York City.

Christie Lamb, also a 2018 WHS grad, plays Claire. Christie is a recent graduate of Columbus State University with a Bachelor of Fine Arts in Vocal Performance and Music Theater. Claire is a blend of the softness of a traditional pastor’s wife with the boldness of a contemporary faith-filled woman.

“Her role speaks for so many pastor’s wives who faithfully serve alongside their spouses and should be shown greater appreciation for their dedication, talents, kindness, and love,” Dana says.

Lily Gable, who graduated in 2019 from WHS, plays Dorian. Lily is currently studying to be a commercial airline pilot. However, her singing and acting talents remain her faithful copilot. She has held numerous lead roles in local productions of Seussical and In the Heights. The character she portrays in SATB: The Musical is a complex one.

“Dorian represents the people that we often overlook because they are quiet, unassuming, and shy,” says Dana. “Yet it is the introverted character that typically has the most insight into other people’s emotions in a way that they never express.”

Dorian is a critical role because she is the underestimated character that is able to make sense of the one event that brings the entire cast to forgiveness and compassion.

“Though this is a musical that takes place in and around a church, I have carefully written it to avoid denomination and theology,” Dana says. “I wrote it around the theme of loving and respecting your neighbors as yourself in spite of mess and chaos, because in the end, it’s the one thing that we have to try and agree on. It’s where reconciliation is born.”

“This show will make you laugh, cry, and everything in between, but it will leave you with a renewed sense of appreciation for forgiveness and compassion,” Dana promises.

“Fayette County produces some of the top talent for music theater,” she says. “I knew exactly where I was going for talent when it was time to produce this show. We’re opening the festival and I could not be more excited to be the show that welcomes the Atlanta Music Theatre Festival back onto the stage! The shows are all so unique, the theater is gorgeous, the talent is undeniable. I invite Fayette County to show support for these young people at our one show on Friday, September 9.”

Tickets are available at https://www.theamtf.com/2022-festival-info.