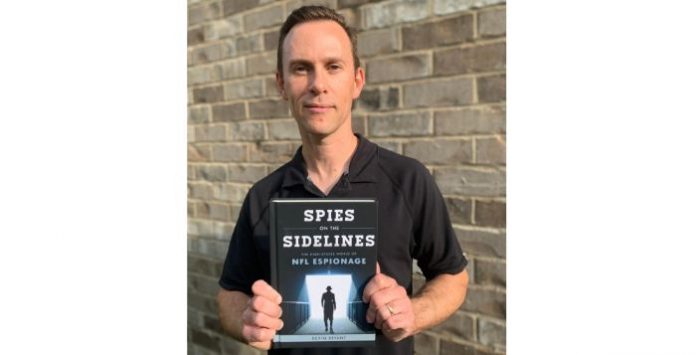 Fayette county author Kevin Bryant has a new nonfiction book that was just released by Rowman & Littlefield entitled Spies on the Sidelines: The High-Stakes World of NFL Espionage. This book provides the first in-depth investigation of spying in professional football, as well as the countermeasures utilized to defend against these threats. Spanning across all teams and eras, Kevin shines a light on the shady world of NFL reconnaissance—from clandestine photography and hidden draft prospects to listening devices and stolen documents—along with the permissible, if sometimes questionable, spy techniques teams utilize day in and day out to gain an advantage over their opponents.

Spies on the Sidelines reveals that, behind the game-day action, professional football can be as cloak-and-dagger as American intelligence agencies. This fascinating and expansive compilation of NFL spy anecdotes exposes the extraordinary measures teams are willing to take in order to win. “Some teams will go to almost any lengths to win,” Kevin said. “Sure, people know about Spygate and Deflategate but that’s just the tip of the iceberg. All times collect information on opponents and there is a whole history of NFL espionage tales, many of which would fit right into a Tom Clancy novel.”

Kevin has a bachelor’s degree in History and master’s degrees in Intelligence Studies and Sports Management. He is also a former special agent with decades of experience collecting and safeguarding information for the U.S. government. To learn more about Kevin and the book you can visit his website at https://www.spiesonthesidelines.com. He will be conducting a bunch of podcasts, radio, and television interviews and would love to have you follow along. His schedule links to the interviews, and his social media handles can all be found on his website.