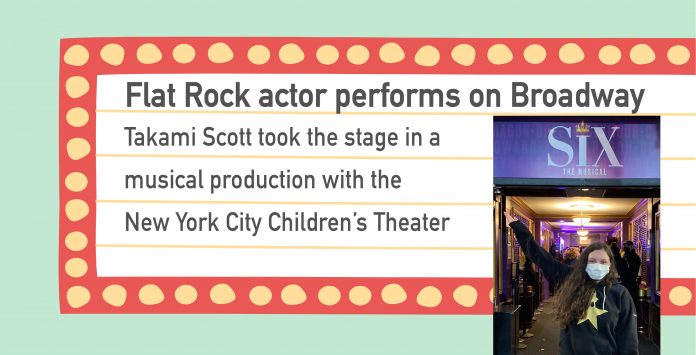 After getting a taste of Broadway, Takami Scott can’t wait to see her name in lights. Back over the holiday break, Takami, a student at Flat Rock Middle, took the stage in a musical production with the New York City Children’s Theater.

The New York City Children’s Theater offers classes for aspiring actors where you audition for shows, including some played on Broadway. Takami’s talent shone through, and she was selected. She played the role of Katherine Howard in “Six,” a modern musical retelling of the lives of the six wives of Henry VIII presented as a pop concert.

It was a stressful but rewarding experience working towards her big Broadway debut.

“We were given our scripts last year so we had a year to practice. However, we obviously had to come back to perform so they had dress rehearsals on Saturday and Sunday, so we really only had two days to work together on the show,” she said. “It ended up great since everyone studied!”

Perhaps her favorite part was meeting people who share her passion for performing.

“I honestly liked bonding with the other girls since they were extremely fun to work with.”

Following her Broadway debut, Takami returned to Flat Rock for their debut show “Once On This Island.”