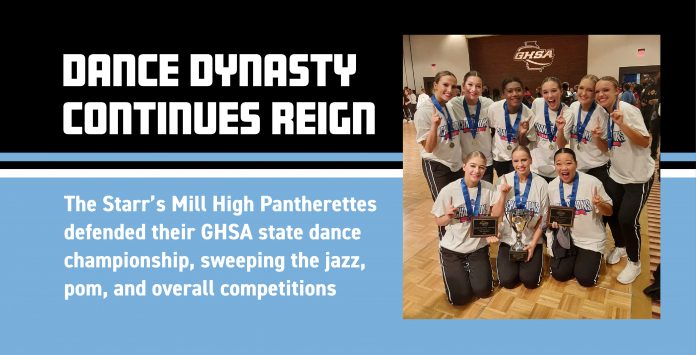 The Pantherettes still hold the crown. At the GHSA State Dance Championship on February 12, the Starr’s Mill High dance team defended their title.

The Pantherettes swept the competition this year, winning the Jazz and Pom categories and taking the overall title for Class 5A-6A. Ramping up to state was a dominant run with the team racking up 10 first-place finishes in competitions this season.

“The team is a great combination of dancers,” said coach Patt Coleman. “The ladies made me proud as they demonstrated their skills and talents in both routines.”

Starr’s Mill is going to be making more room in their trophy case as the dance squad has won the overall state championship for the third-straight year and extended a run of a state title in at least one discipline running five-straight years.

“The team is a great combination of dancers. I had three returning senior dancers, and the rest of the team was new to competing for our Pantherettes this year. The choreographer, Nichole Martin, considered the skills of the dancers and showcased them in both outstanding routines,” said Coleman. “This team has so much positive energy, and they brought it to the floor, especially at State!”