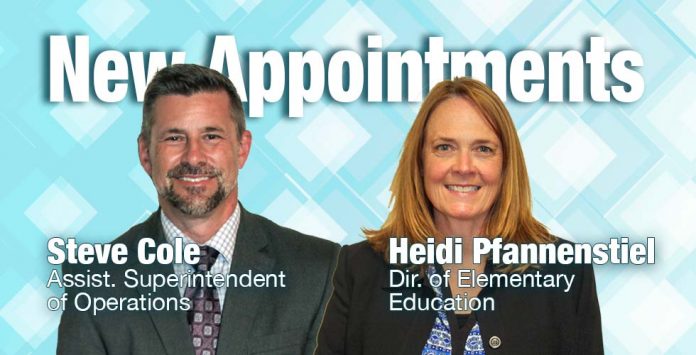 The Fayette County Board of Education at its January 10 work session unanimously voted to appoint two school principals to fill open administrator positions at the county office.

Steve Cole, who has served as the principal of Whitewater High School for the past five years, has been named the new assistant superintendent of operations. He replaces Mike Sanders who retired in December 2021.

Cole has 27 years of experience as an educator, all in Fayette County. He began his career as a health and physical education teacher at J.C. Booth Middle School. He also taught at Flat Rock Middle School before being appointed as an assistant principal at McIntosh High School and later at Whitewater High School.

Heidi Pfannenstiel, who has served as the principal of Huddleston Elementary School for the past 10 years, has been named the new director of elementary education. She replaces Kim Herron who was promoted to assistant superintendent of student achievement in November 2021.

Pfannenstiel has 34 years of education experience, most of which has been in Fayette County. She taught at Oak Grove, Peeples, Huddleston, Braelinn, and Cleveland Elementary schools before being promoted to assistant principal at the former Tyrone Elementary School and later at Huddleston Elementary School.

Both Cole and Pfannenstiel will officially transition into their new roles on February 1, 2022, allowing time for their replacements to be selected.

— This article provided by the Fayette County School System.