Guest speaker will be Captain (Ret.) David Jenkins, U.S. Army, followed by a reception for Veterans and their guests hosted by the Fayette Daybreak Rotary Club. Following the program, you can visit our corporate sponsor, Partners II Pizza, for special half-price discounts on Veterans Day. The park is located off Senoia Road between Arrowood Road and Brentwood Road. 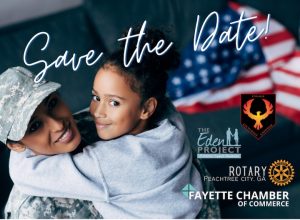 Locally, the Eden Project is partnering with the Peachtree City Rotary Club and the Fayette Chamber of Commerce to hold a Reverse Job Fair Nov. 12, the day after Veterans Day.

“Our job fair is for those with military service and/or their spouses and anyone on current active duty,” a project news release said. “Our unique ‘twist’ is that job seekers will have their own booth and companies looking for employees will have the chance to walk around and meet veterans at the veterans’ own booths.”

Many of Georgia’s state parks and historic sites are home to remnants of forts and earthworks dating back to the 17th century. At these special places, history doesn’t just live on plaques and markers; it literally comes alive during re-enactments held occasionally during the year.

In honor of Veterans Day on Nov. 11, plan a trip to one of these five sites that highlight the history of Georgia’s earliest battles through the Gulf War. Find more about Georgia State Parks & Historic Sites at GaStateParks.org/History.

Tour the oldest English fort remaining on Georgia’s coast at Fort King George, which was the southern outpost of the British Empire in North America from 1721 until 1736. The on-site museum offers a film detailing the 18th and 19th- century history of Fort King George, including Guale Indians, the Santo Domingo de Talaje mission, Fort King George, the Scots of Darien and 19th century sawmilling.

In the late 1700s, the Continental Congress fortified barracks on the Medway River at Sunbury to protect the seaport from the British. When the British demanded the fort’s surrender on November 25, 1778, the defiant Col. John McIntosh replied, “Come and take it!” The British refused and withdrew back to Florida, but 45 days later, they returned with a superior force, and on January 9, 1779, Fort Morris fell after a short but heavy bombardment. Stand within the earthwork remains and view scenic Saint Catherine’s Sound. A museum and film describe the colonial port of Sunbury and the site’s history.

Located south of Savannah on the banks of the Ogeechee River, Fort McAllister State Park showcases the best-preserved earthwork fortification of the Confederacy. Despite being attacked seven times by Union ironclads, the fort didn’t fall until 1864 — ending General William T. Sherman’s “March to the Sea.” Explore the cannons, a furnace, bombproof, barracks, palisades and other remains of the battlefield, and admire artifacts in the Civil War museum. This scenic state park includes cabins, camping, walking trails, and fishing piers.

For U.S. Veterans, Georgia Veteran’s State Park can’t be missed, as it was established as a memorial specifically to them. Visit the park’s museum that features armored vehicles, uniforms, weapons, medals, and other items from the Revolutionary War through the Gulf War—including the Boeing B-29A aircraft.

In May 1864, the Confederate troops at Pickett’s Mill fought for victory of the battlefield against the Federal Army, resulting in a week-delay of the Federal advance on Atlanta. Today, the Pickett’s Mill Battlefield Historic Site is one of the best-preserved Civil War battlefields in the nation. Travel roads used by Federal and Confederate troops, see earthworks and walk through the same ravine where hundreds died. One of two original cannons used during this battle is now on display in the museum, on loan from Atlanta History Center. Stay overnight nearby at Red Top Mountain State Park’s new cabins or campground.

Visitors can bring used U.S. flags needing retiring to the park for a brief program. Meet at the Stone Amphitheater. Veterans with ID enjoy free boat rental for one hour. $5 parking. 706-663-4858.

Veterans, military service members and their families enjoy free admission to Hardman Farm Historic Site. Our last guided tour of the mansion will begin at 3 p.m. 706-878-1077.

Receive a red poppy made by disabled veterans in honor of those who are serving in our nation’s armed forces. Includes display by Jonnie Classen Melillo on the tradition of the poppy. $7-$10. 706-655-5870.