A Catholic school in Tyrone that opened in 1999 for pre-K through 8th grade will be shutting its doors after this school year to merge with a Catholic high school in north Fayette County.

“Our Lady of Victory Catholic School opened the 2021-2022 school year in celebratory fashion, even though OLV will close its doors after this school year,” said Principal George Wilkerson.

“In the fall of 2020, the Archdiocese of Atlanta announced that Our Lady of Victory will be consolidating with their sister high school Our Lady of Mercy. The new school will be named St. Mary’s Academy and will open its doors to PreK-12 grade students in the fall of 2022,” Wilkerson said.

OLV serves students and families from multiple parishes in the southern metro Atlanta area. Pastors from St. Matthew (Father Kevin Hargaden), and St. Philip Benizi (Father John Koziol) graciously came out on the first day of school to welcome and pray for the students as they begin what will be the last year on this campus,” Wilkerson said. 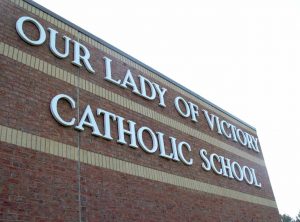 “Over 22 years ago this school was founded with the motto, ‘Our Faith can Conquer the World.’ It is incumbent on us as a school community to carry out that mission as we bring this wonderful building to a close,” Wilkerson told the students.

“Even though we are leaving this school after this year, we still want to celebrate the foundation that has been put in place in this community. The seeds of wisdom, grace, and love will continue to carry us out this year and onto St. Mary’s Academy. We are so pleased to have the support of our local parishes and we cannot thank Fr. Kevin and Fr. John enough for all the support they have given us. We are so thrilled to have the school year and OLV’s last year begin on such a positive note!”

“OLV and OLM schools have experienced sharp enrollment declines, losing about 50 percent of their enrollment over the past seven years, so something clearly had to be done,” said Hal Plummer, superintendent of schools for the Archdiocese of Atlanta, in his announcement last January. “We believe bringing the two schools together on the beautiful OLM campus and developing a strong PreK-12 school will not only stabilize but increase enrollment.”