Atlanta Braves’ fans still chuckle about Pascual Perez, who missed his pitching start for the Braves after getting lost on Interstate 285.

It was August 1982, and the 25-year-old drove around the 64-mile beltway that encircles Atlanta several times in search of Atlanta-Fulton County Stadium. He arrived 10 minutes after the game started and earned the nickname “Perimeter Pascual” and “I-285.”

Today, Perez would earn envy for arriving only 10 minutes late, even with the new Braves’ stadium outside I-285. The “Perimeter” can be a parking lot, an accordion or a bottleneck, depending on time and location.

Development and population growth have overwhelmed I-285, which began construction in 1957 and opened in October 1969. Local freight trucks may use the interstates inside I-285; all others must use I-285, originally intended as a bypass. Today, local traffic uses it as much, if not more than, through traffic.

Plans for an outer perimeter highway, which would have allowed more through traffic to bypass metro Atlanta, were scrapped around 2002.

At a June meeting of the Dalton League of Women Voters, the conversation turned to the Northwest Corridor Express Lanes, 17 miles of toll lanes alongside I-75/575 north of Atlanta that reverse direction daily. One attendee wondered why the lanes were not bidirectional.

The answer, of course, is that Georgia, having opted to fund construction and operation of that project, sought to meet the greatest need at the lowest cost. With traffic mostly inbound toward Atlanta weekday mornings and outbound in the afternoon, using the same lanes and switching travel direction helped cut construction costs while maximizing benefits.

I-285, on the other hand, is a continuous loop of heavy traffic in both directions. Congestion builds at the interchanges, among the nation’s 10 worst bottlenecks. Wrecks are commonplace as trucks, passenger vehicles and motorcycles mingle, and resulting delays affect both sides, in no small part because of “rubberneckers.”

Capitalizing on the success of existing toll projects, the GDOT has unveiled its most promising plan yet to improve mobility and increase capacity on I-285: a public-private partnership (PPP) allowing a private company to design, build and operate toll lanes on the northside, between I-20 East and I-20 West. While the state is working toward a seamless toll network in the metro area, existing toll projects are operated by the state.

The private contractor would recoup costs through a 50-year contract that gives it the ability to set and collect tolls on the new lanes “within the contract criteria established” by the state. Overhead transponders will use the Peach Pass; tolls will be market-based, changing with travel conditions to provide reliable trip times. Transit vehicles will travel free, offering riders the enormous trip time savings demonstrated in other toll lane corridors.

GDOT cites “the opportunity for more innovative solutions to address congestion and mobility,” including the potential for more access points. Furthermore, GDOT notes, this “will shift more financial burden from the State and will result in a reduction in public funding commitments for the projects over future decades.”

There’s more promise in this PPP project for users. Most important, the private sector will expedite mobility in metro Atlanta while reducing the burden on all Georgia’s taxpayers. It’s GDOT’s responsibility to educate motorists and craft a thoughtful, performance-based contract that preserves “customer” service and protects taxpayers. On the state’s watch, clogged drains caused flooding that has shut down the I-75/575 toll lanes several times in recent years.

This PPP model has operated successfully internationally for decades. Georgia will own the lanes. The operator will maintain them. Motorists will have a choice. Some roads – and expedited improvements – are more valuable than others. This is one. 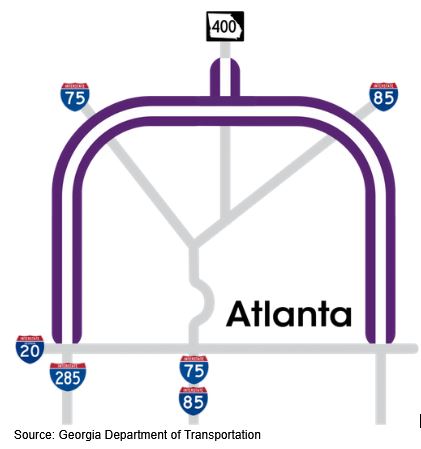 For more information about the project, visit https://majormobilityga.com/i-285-express-lanes/

[Benita Dodd is vice president of the Georgia Public Policy Foundation. Established in 1991, the Foundation is an independent resource for voters and elected officials.]