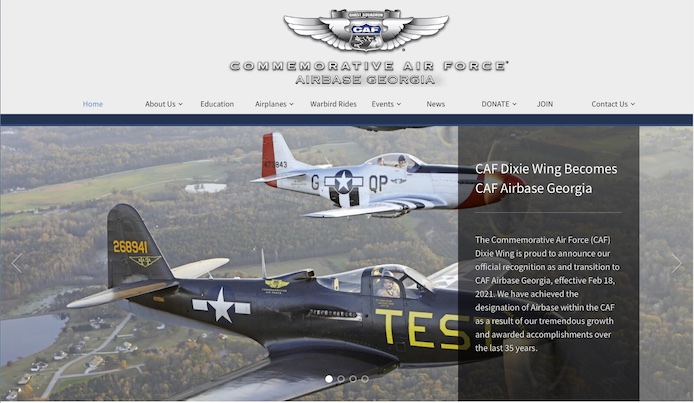 The group has achieved the designation of Airbase within the organization as a result of growth and awarded accomplishments over the last 35 years.

“We are one of the largest, most active, and successful units in the CAF,” said Airbase Leader Jim Buckley. “With over 350 members, multiple award-winning aircraft restorations, a maintenance and machine workshop, continuous growth and financial stability all of which led to this milestone. We are excited and proud to be honored with an Airbase designation.”

As defined by the organization’s national headquarters in Dallas, Texas, “a CAF Airbase is an aviation attraction with a population base of at least 500,000 within a 100-mile radius. The facility must be located on airport grounds and contain interactive and interpretative displays, flying aircraft, aircraft restoration facilities, and host an annual public event such as a Fly In. Each CAF Airbase serves as part of the business community and is a publicly recognized attraction/destination and education distributor.”

“We have seven operational aircraft and a new restoration project underway,” explained Buckley. “We have created a strong reputation in our local community and throughout the aviation industry as a result of our commitment to our mission to ‘Keep ‘em Flying.’ Our goal is to be embraced as Georgia’s World War II Flying Museum. We do this through events and programs locally, regionally, and nationally. As a flying museum our organization is uniquely poised to both attract people to our facility and perform outreach programs in Georgia and across region.”

In recent years the Airbase programs have been intently focused on education with a mission to inspire the next generation of pilots, aviation mechanics and citizens. “In late 2019, we began working with local schools and aerospace employers to help solve the pilot and aviation mechanic shortage and also help teach World War II history at all grade levels.” Buckley said. “We also partnered with the tourism sector and a foundation has been established to assist in future fundraising efforts.”

Membership in the Commemorative Air Force and Airbase Georgia is open to men and women ages 18 years and older.

The CAF Airbase Georgia, based in Peachtree City, Ga., was founded in 1987. The Airbase, one of the largest units of the Commemorative Air Force, maintains and flies seven WWII aircraft including a P-51 Mustang, an FG-1D Corsair and rare types such as the SBD Dauntless dive bomber and P-63A Kingcobra. The unit, composed of 350 volunteers, is a non-profit, tax-exempt organization that relies on contributions of time and funds to carry out the mission of the CAF. For more information, go to https://airbasegeorgia.org.