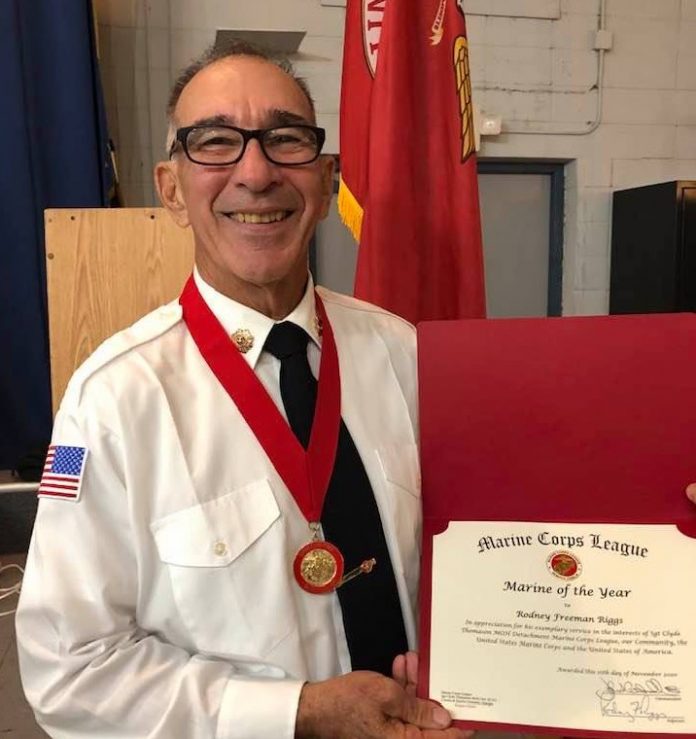 Rodney Riggs, Newnan, received the “2020 Marine of the Year” for Fayette and Coweta counties at the local celebration of the 245th anniversary of the founding of the United States Marine Corps. A number of Marine Corps League members were nominated for this distinctive honor.

Riggs is a long-time member of the detachment and has served in a number of offices, both elected and appointed. He has been active in the Toys for Tots program as a participant and has also recently taken on a leadership role. The program has, in past years, provided toys for over 6,000 children in the local area at Christmas.

He has assisted the detachment in fund-raising activities including golf tournaments and the flag giveaways. He is a long-standing member of the Color Guard and participates in the Fallen Marine program.

He is a valued member of the Marine Corps Ball committee and has ensured that the celebration takes place with appropriate honors and decorum.

This Marine served in the elected position of Judge Advocate during the time the national Marine Corps League was undergoing several by-laws changes requiring extra hours to insure that the detachment would be in compliance with Department and National By-Laws.

Riggs has represented the detachment at several department, or state level, and national conventions.

Riggs has shown leadership in the community as well. He is very active in his church life with services as a deacon, a Bible teacher, and treasurer. In 2016, his pastor at Royal Baptist Church described him as a “skilled Bible student and teacher.“ He is also active in community organizations including the Optimist Club.

Although, it was not taken into consideration in this selection, he has advanced to the highest level, that is, the status and rank of Pedigreed Devil Dog in the Military Order of the Devil Dogs, the honor society of the Marine Corps League

During the award presentation, he was described as, “always composed, poised, and exudes the quiet confidence of leadership while, at the same time, remaining humble, approachable, and encouraging.“

The presenter also said, “This Marine has been a Marine, a leader, and a servant to his nation and community all of his adult life. After high school, he enlisted in the USMC and completed his tour with the rank of Sergeant. He became a police officer and, after 41 years, retired with the rank of Deputy Chief of Police from the Newnan Police Department.

“He had also joined the Marine Reserves where he served 26 years and was called up to go to war during Operation Desert Shield / Desert Storm. He retired from the reserves as a Sergeant Major. The American Legion Post #57 named him the Veteran of the Year in 2014.”

One nominator said, “I would trust him with anything I hold dear.”

Another said, “He has been a rock for us.”

Another said, “He is a Marine’s Marine.”

One Marine veteran said, “He has also achieved a feat that many of us only dream about. He can still fit into his dress blues!”

The presenter, David Epps, Senoia, the 2019 Marine of the Year, was joined on the stage by the past recipient of the award has Epps made the presentation on behalf of the detachment.

The mission of the Marine Corps League is to promote the interest and to preserve traditions of the United States Marine Corps; strengthen the fraternity of Marines and their families; serve Marines, Fleet Marine Force Corpsmen, and Chaplains who wear or who have worn the Eagle, Globe and Anchor; and foster the ideals of Americanism and patriotic volunteerism. There are over 1,140 detachments throughout the nation. Membership is open to all active duty, reserve, and honorably discharged Marines and Fleet Marine Force Navy Chaplains and Corpsmen. Those interested in the League may log on to mclnational.org and MCL1325.net.