After another foray into the world of the Livable Centers Initiative (LCI) on October 22, we saw the Mayor and Council Members dodging negative comments and deflecting blame on who was responsible.

In review, this City Council has previously made our heads spin on numerous occasions. The logic behind their actions is somewhat sketchy and they often pitch an outlandish proposal and then go into hiding and denial mode when the public finds out about it.

No one on the City Council can give a logical explanation as to why they keep issuing the warning that we are rapidly running out of land to build corporate headquarters and light industrial (tax revenue positive uses) and then they keep rezoning applicable land to high density residential uses. Bewildering, indeed.

This Mayor and Council have consistently raised our taxes and city fees, openly stating they cannot figure out how to pay for city services without tax increases, and then they proceed to add thousands of homes and a huge amount of new citizens on MacDuff Parkway and elsewhere that will create a huge demand for more city services that we cannot afford.

They could structure a plan for solid revenue development with corporate offices and technology jobs, but they keep coming back with apartments, townhomes and condominiums instead. We have plenty of those now.

At the October 22 meeting, Councilman Mike King kept playing the dodge ball semantics game. Previously, King was replying to angry constituent emails saying that there was no such thing as a plan to demolish the Tennis Center and replace it with apartments (see Exhibit A) nor a plan to build apartments and retail shopping on Drake Field next to City Hall (see Exhibit B). Of course, those plans were created. In fact, I was warned by insiders that the errant plans were gaining steam and citizens needed to be vocalizing their opposition. 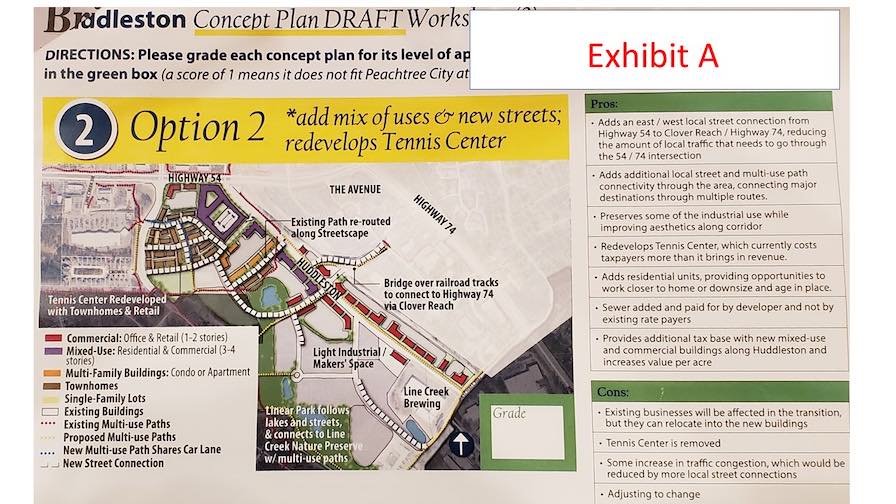 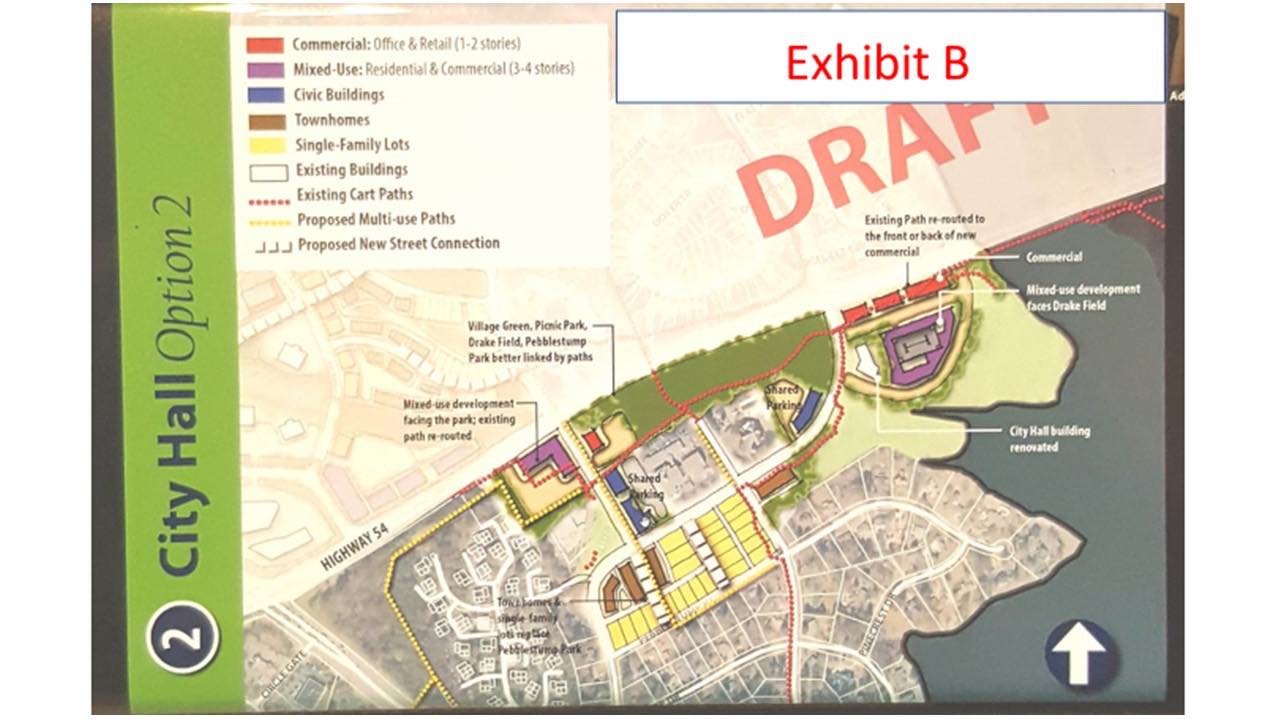 The game Councilman King is playing goes like this. After he is confronted by me and others at the Oct. 22 meeting, proving those plans actually exist contrary to what he was telling constituents, he shifts to saying it is the fault of city planning staff and the LCI Core Group committee, and the shocking plans were never officially voted on by the City Council. Duh, none of the plans have been officially voted on and the citizens are not foolish enough to wait until they show up on a council meeting agenda to speak up.

So Mayor Fleisch, Councilman King and the others voted on an LCI grant submission to the Atlanta Regional Commission, approved the planning staff to move forward, approved the contract with the urban planning consultants and then claim they know nothing about what is going on with the LCI planning. This either means they are lying, or the planning staff are negligent regarding keeping the City Council informed.

Copies of those plans were in City Hall and video of the LCI Core Group committee’s virtual-only meetings were available on the website. The mayor and council had plenty of access and after their dreadful Great Wolf Lodge project on top of an existing subdivision, the outrageous downtown city center plan and the reckless Calistoa mini-city plan at the end of our airport runway, it is not difficult to imagine they were guiding the plans from behind the scenes. This City Council recently doubled the number of homes on a Highway 54 East site after our Planning Commission unanimously voted against it, so, yes, things happen.

Council members, planning staff and the planning consultants all had to admit that they never considered the drastic changes to our school attendance districts that would result from the mass developments geared toward low income families. Likewise, all that I spoke to had to admit that off-loading the significant traffic from the mass developments would worsen the Hwys. 74-54 intersection.

The Westpark plan is another cruel joke. The city government wants to take a stellar corporate office area and rezone it to multi-family residential. The road access is already a problem there and adding thousands of residents whose families will be making multiple trips every day would be suicide.

The urban planning consultants were very honest, and the meeting attendees generally appreciated their admissions when something was amiss with the plans. Many of them openly stated it was unfortunate that adjacent subdivisions were not consulted in the planning process nor asked to be on the LCI Core Group committee. Oddly enough, there is no list on the websites that we could find of who exactly was on the “citizen” committee.

A disheartening point related to the LCI process is that our City Planner Robin Cailloux does not have a real understanding of Peachtree City and has moved to radically change our successful land planning formula. She speaks in planning cliches.

Cailloux created an unfortunate sign that she displayed at the building entrance for the October 22 meeting (see Exhibit C) that shows her serious disregard for the city’s dramatic planning success over the decades. The title was “Dispelling some myths: planning facts” as if all the local citizens who have lived here for decades who disagree with her absurd plans were not telling the truth. In huge bold letters, Cailloux writes on the sign, “No build just means No Plan” which essentially means she holds our current land plans in total disregard, and she considers all of our planning up to this point to be null and void.

She boldly proclaims on the sign, “Individuals have property rights and they could rezone or build undesirable things according to the current zoning.” She must think we are fools.

First, no can rezone without a vote of the City Council. Second, the “undesirable things” they can build under the current zoning are the very things the City Council told us we needed, light industrial and the like. The real undesirable things, according to the taxpayers who fund her employment are the irresponsible traffic heavy, multi-family complexes she keeps wanting to force all over town.

Next, the ill-conceived sign says, “The city is not purchasing and assembling land to build these concepts.” In talking to the urban planning consultants, I was told that the initial focus was building on Drake Field and demolishing the Tennis Center because the city already owned those sites. And please do not blame the consultants as they were set up for failure by the city.

The last tragic statement on the Cailloux sign says, “Current zoning led to developments in the last 20 years that have caused traffic congestion because they serve the car.” That is the most thoughtless fabrication I have ever seen out of our local government.

Of course, Ms. Cailloux has not been here over the last 20 years. Most of the traffic laden developments including the Home Depot/Wal-Mart and the Overlook shopping center on Highway 54-W were opposed by the citizens and the City Council changed the zoning and forced them in. This current City Council is also responsible for the overdevelopment of the MacDuff Parkway corridor which should have been zoned light industrial and office institutional.

It is only when the city drastically deviated from the traditional land planning that we witnessed failure.

Seriously, how many totally half-baked plans pushed by this City Council and Cailloux have we had to fight off? Likewise, a building full of angry people on October 22 were wondering how they lack the common sense to think that families living in close to 2,000 multi-family units, new subdivisions and patrons of the proposed large retail establishments would not use cars to get around, but that is their position.

At the October 13 meeting, Cailloux used the example of The Avenues shopping center as her “walkable” example, the shopping center we all drive to. We are not fools, Ms. Cailloux, and the sign was brutally insulting to educated adults. “Walkable” is another cliche used in planning circles to attempt to convince the public that traffic from the developments is not an issue.

As if the cruel sign and the dodging and denying were not bad enough, Cailloux designed the public feedback component of the October 22 meeting so that the citizens could not opt for the “no build” option. 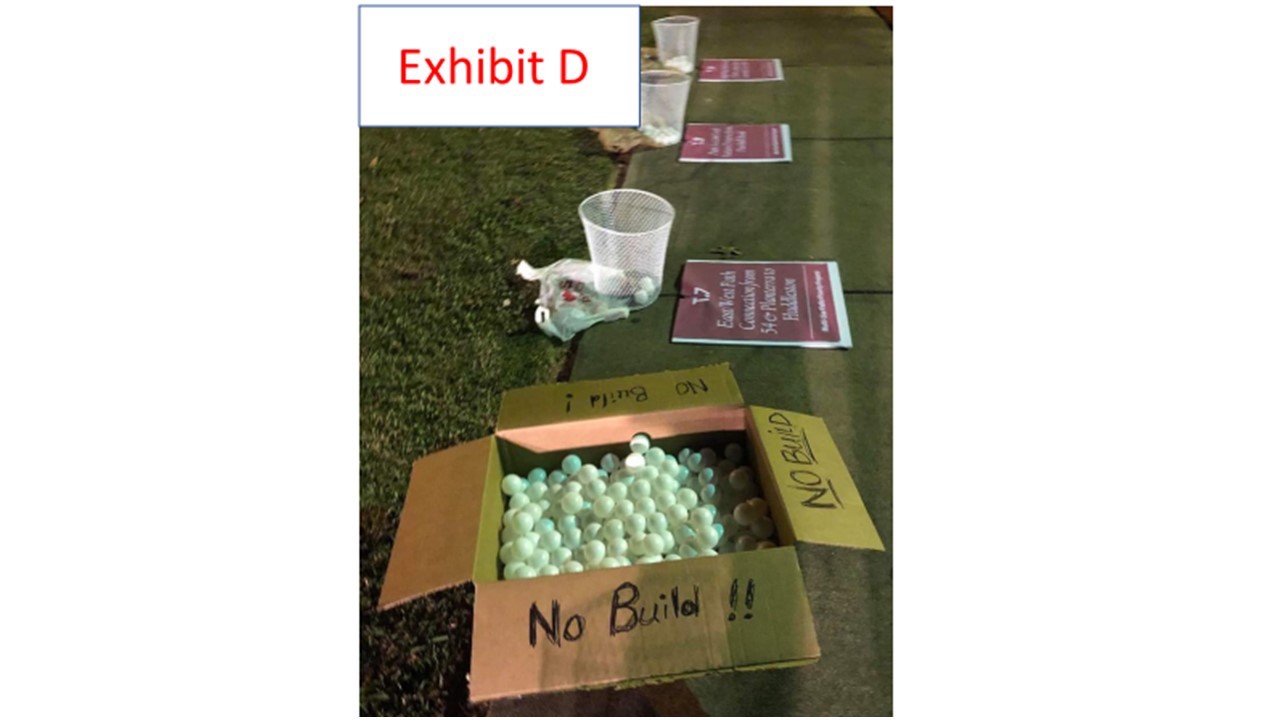 Mayor Fleisch kept telling people at the meeting they have three choices with one being no build. Unfortunately, Cailloux had little trash cans labeled with different elements of the plans attached to them. Everyone was asked to drop a ping-pong ball in the basket that best reflected their sentiment on the plans, but the “no-build” choice was intentionally left out, forcing only positive comments on the plans.

Not to be deterred, a local citizen refused to allow the deception. He went to his car and brought back a cardboard box and labeled it “no build.” The gentleman’s box was the overwhelming choice of the crowd and it could have been the unanimous choice had the box arrived sooner (see Exhibit D).

In response to the City Council not listening to the citizens who elected them, a petition in opposition to the appalling plans has been created. Please join your neighbors and let us hope we can end the foolishness.

Here is the link for the digital petition: http://chng.it/H4RxyFjJLm and please have each voter in your family sign individually.

Additionally, send them your thoughts via email to council@peachtree-city.org and tell them to (A) stop creating a growing tax burden for the taxpayers, (B) stop proposing multi-family developments, (C) reinstate the moratorium on rezoning land to multi-family, (D) follow our planned-village-style land plans, (E) do not make traffic worse for us, (F) focus on real solutions for the 74-54 intersection and (G) show some financial discipline.

[Brown is a former mayor of Peachtree City and served two terms on the Fayette County commission.]