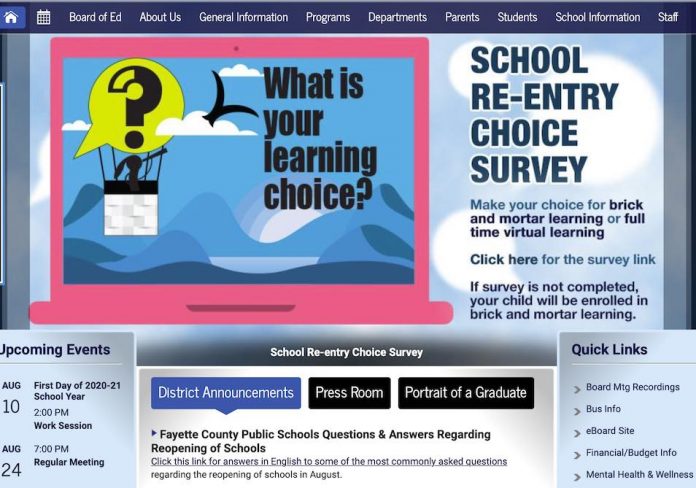 The July 20 meeting of the Fayette County Board of Education included a lengthy discussion on school re-opening that appeared to generate more questions than answers. Though more information is expected in the coming days, several on the board, along with Superintendent Jody Barrow, said if a decision had to be made at the meeting, they would vote to begin the year with distance learning rather than opening schools for classes on Aug. 10.

The re-opening topic began at the start of the meeting, with nearly two dozen parents and teachers weighing-in during public comments. They stressed a litany of concerns, with some saying the current re-opening survey left too many questions, while most said initially re-opening schools virtually and avoiding the brick and mortar option was preferable due to safety concerns in the time of the Covid-19 pandemic.

Board members were told by Barrow that, as of July 15, 76.8 percent of parents wanted the bricks and mortar model while 23.2 percent wanted virtual online (distance) learning. The survey was extended until July 22. Barrow said the percentages are expected to change.

As it currently stands, the re-opening plan comes in two major categories, one of which has three aspects.

One option is to run the school year full-time virtually. The other major option is bricks and mortar, where students return to school. Yet within that option, there are three subsets.

“Green” means starting the school year in the building, along with a large number of safety requirements and with low or no spread of infection present in the community.

“Red” means starting the school year with full-time distance learning done remotely due to a substantial Covid-19 spread and confirmed cases in the community.

“Yellow” is a hybrid of green and red, with students attending class two days per week and virtually/at a distance three days per week. Yellow is determined by a minimum to moderate spread of infection in the community.

Regardless the subsets, the bricks and mortar option brings a nearly endless number of safety and sanitation precautions.

Barrow during the discussion gave an updated re-opening plan (https://simbli.eboardsolutions.com/Meetings/Attachment.aspx?S=4067&AID=1173034&MID=86350) which contained a wealth of components.

Barrow also noted that the school system faces unprecedented circumstances with Covid-19 which are accompanied by radical uncertainty.

“We may have to consider going virtual for the beginning of school due to the current increased spread. Bricks and mortar is the best option, but it may not be the safest,” Barrow said.  “If I had to recommend something today, I’d have to recommend ‘red.'”

Getting data specific to Fayette County, especially as the Covid-19 situation is fluid and changing, is problematic, board members noted.

Even with reports coming from Ga. Dept. of Public Health, CDC and Ga. Department of Education, Anderson noted that the available data does not provide the metrics needed to make a decision on re-opening.

“We’re effectively nailing Jell-O to a tree,” Barrow said. “We’ve been tracking data since March. The problem is that it’s reactive.”

Citing an example, Barrow said it can take 3-7 days after a person is tested to get the results. Barrow also noted that the Covid-19 data is based on a 14-day average.

“The reality is that there’s no certainty even when we have the data,” Barrow explained, adding that he had asked, but had not received, data specific to Fayette County. “The concern is the (current) increase in the spread in Fayette.”

Bringing the topic to the parent survey, Anderson said, “We can’t ask parents to take the survey without data.”

Marchman agreed, saying the decision, whether by parents or the school board, needs to be made based on facts, not fear.

Board member Roy Rabold also agreed, asking how a decision could be reached in the presence of so much conflicting data.

In the absence of data, we err on the side of safety, said Chairman Scott Hollowell, adding the belief that the school system is in “red” given the substantial increases in local Covid-19 cases.

Board member Leonard Presberg said given what is currently known, it would be unsafe to open schools in anything but “red,” adding that “I doubt the data will get better in a week.”

Hollowell said he wanted a re-opening decision by Friday (July 24).

Barrow said he will continue to push for measurable, tangible data, “And at some point, we’ll have to talk about where we start unless we delay the start of school.”

Those wanting to watch the meeting online can visit www.fcboe.org and access the Board Meeting Recording section on the homepage.