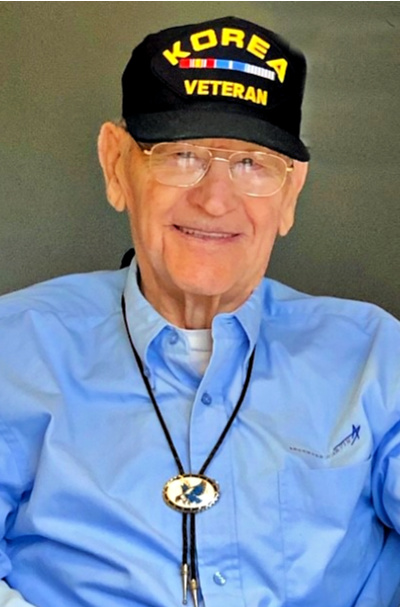 Mass of Christian Burial will be held at 10:30 a.m. on Monday, June 15, 2020, at Holy Family Parish in New Hampton with Father Brian Dellaert celebrating. Burial will be held at St. Mary’s Cemetery in North Washington following the mass. Visitation will be held from 4-7 p.m. on Sunday, June 14 at Conway-Markham Funeral Home in New Hampton with a 3:30 p.m. Rosary and a 7 p.m. Scriptural Wake Service. Visitation will continue at the church one hour prior to the funeral mass on Monday. Online condolences for Rich’s family may be left at www.conway-markhamfh.com. Memorials may be directed to Southwest Christian Hospice in Union City, GA. We ask attendees to be respectful of CDC guidelines.

Richard Leonard was born on July 27, 1932, to Florian and Irene (Brown) Roethler in Ionia. He attended St. Mary’s Catholic School in North Washington. After completing his education, Rich began his life long career farming in Alta Vista. In 1952, Rich was drafted to the Army and served in the Korean War from January 14, 1952 to October 27, 1954.

On July 23, 1958, Rich was united in marriage to Mary Lou Knipp at Immaculate Conception Catholic Church in Gilbertville. The couple lived and worked on their farm, which Rich built, West of Alta Vista until 1976. Then they moved the family to their New Hampton acreage where Rich continued to do farming for many more years. While farming Rich also worked at John Deere in Waterloo, White Tractor in Charles City, the U.S Post Office and he spent many years in the Army Reserves. Rich retired from the United States Postal Service.

His many hobbies included fishing, hunting, farming, gardening, camping, mechanical work, playing cards, playing checkers, and reading. Rich loved spending time with his family and friends. He never met a stranger and his goal was to make you laugh.

He was preceded in death by: his son Jerry; his parents Florian and Irene; brothers, Russ, Joe, Art and Ronny; his sisters, Ramona, Adeline and Angeline both in infancy; his brothers-in-law Bernard Necas and Duane Gerhard; and his nephew Brian Necas.