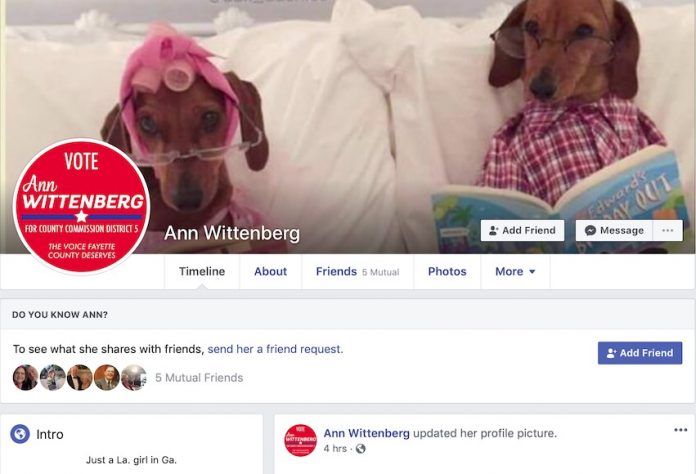 This race is vitally important and I really hope that Fayette voters will think it worthy enough to vote on the Republican ballot and make a difference.

The incumbent, my opponent, Charles Oddo originally ran for office promising to support the county’s position allowing voters to select all five seats but that didn’t happen due to how my incumbent decided to vote.

If I tell you that I am going to vote a certain way on a specific issue, I am going to keep that promise. I have lived in Fayette County for 24 years. I recognize what has made our county a special place and I am willing to fight to keep it that way.

People who have attended Board of Commissioners meetings like me have witnessed that the current BOC are not willing to fight to maintain our extraordinary quality of life.

2. I was absolutely disgusted when I witnessed in meetings and read the accounts in the newspaper of a long list of women who complained that they were being harassed while working in the county’s 911 Call Center. There was even documented proof in the Call Center Director’s employee file which then-Commissioner Brown fought to make public. The matter was brought before the Board of Commissioners at a scheduled meeting.

Everyone of those female employees were either forced out or they left. For the record, Commissioner Rousseau and then-Commissioner Brown were the only ones who called for an investigation into the large number of complaints and incumbent Oddo, Commissioner Maxwell and Commissioner Ognio voted it down and said nothing was wrong in the department.

The Director of the 911 Call Center eventually resigned after the newspapers began reporting on the continued abuse of the female employees and the public demanded action.

Many of us have daughters, sisters or wives and we should not, and I will not, stand for this behavior. The accounts of this appalling behavior are well documented in the local newspapers and in the Board of Commissioner meeting minutes.

Let me say emphatically that unlike the current incumbent Charles Oddo, I will never stand by while any employees get abused. I do not think any voters in Peachtree City, Tyrone, Fayetteville, Brooks or Woolsey are going to support such widespread and severe abuse of women in our county.

Imagine the pressure those women were under just handling our emergency calls and then add the abuse and harassment on top of that. To do nothing is inexcusable. Please do your research on this issue. It happened but will never happen again if I’m elected.

3. We finally started seeing some progress on making significant improvements to the I-85 and Highway 74 interchange before the incumbent Charles Oddo was made chairman of the Board of Commissioners in 2014. I know this is very important to our citizens from Peachtree City and Tyrone who suffer daily in very long traffic jams at the interchange. I know there is massive support for making improvements to the interchange.

Once incumbent Oddo took over, the I-85 and Highway 74 interchange project came to a complete standstill. I promise that I am not going to sit on my hands and do nothing. You have my commitment to work with our state legislators, Governor Kemp’s office and the Georgia Department of Transportation to get that project moving as soon as possible. “There is nothing we can do” is not an acceptable position!

4. I will also propose a two-term limit for all BOC positions. It seems the incumbents have become complacent and don’t listen to the taxpayers. This is a huge issue and a reason new people need to be elected.

Every county commissioner and every county employee must obey the law, no exceptions. That seems so common sense obvious, but incumbent Oddo also literally attempted to prevent some of his colleagues from having access to government records. This is in direct conflict with the Georgia Open Records Act.

It took the County Attorney and the First Amendment Foundation of Georgia to openly oppose incumbent Oddo’s attempts at keeping county government records secret for Oddo to drop his efforts.

I vow to obey the law to the letter. From my perspective, there is never a reason to not follow the Georgia Open Records Act and the citizens deserve unqualified accountability.

5. One of the most cruel acts of government that I have witnessed is when incumbent Oddo completely shut down and ignored the Fayette County Humane Society. The Humane Society was attempting to offer some sound changes to the county ordinances related to cruelty to dogs and cats.

The Humane Society, at their own expense, spent months working on some draft ordinance changes for Board of Commissioners consideration. In front of a packed audience, incumbent Oddo literally voted to exclude all county staff members from working or consulting with the Humane Society. He totally shut the Humane Society down and the audience was stunned.

Keep in mind that the county’s animal shelter was killing dogs and cats once the shelter capacity was around 50 percent. There was no valid reason given for this kind of heartlessness. Also keep in mind that dog and cat owners who displayed brutality towards their pets where Animal Services had to be called in were given back their pets by the county.

The Humane Society and the general public all knew this was wrong and no one appreciated the Incumbent’s disregard for the animals nor his animosity for Fayette County citizens and their requests.

We are very fortunate to have good support from several rescue groups in the county. These people should be given a medal for all of their work to help make life better for the animals. Month after month Fayette County citizens who wanted simple and reasonable changes to the ordinances and policies regarding the Animal Shelter were scorned at Board of Commissioners meetings.

Amazingly (I am being sarcastic), recently, when incumbent Oddo and two of his colleagues got closer to this election day and realized that a large number of local citizens wanted them out, they then pitched a proposal to create a new animal shelter.

You have my pledge that I will listen to and seriously examine all citizen proposals. I will treat you with respect. I will not cut off your access to government. I will support changes to our ordinances that prevent people from committing brutal abuse to dogs and cats in Fayette County.

In the previous question, I gave just a few examples of how my opponent, incumbent Charles Oddo, shows a significant disregard for the citizen taxpayers who put him in office.

I will not show great disdain for local citizens in public meetings. I will not turn a blind eye towards abusive behavior. I’ve run several successful businesses and treated everyone with dignity and respect. I always listened to any concerns.

I give you my word that I will not look the other way when I see government abuse. Even if I am the only vote to put a stop to abuse, I will take that stand and I will vote accordingly.

Bleeding reserve funds or cutting back on necessary county services to provide annual pay raises is something I oppose. You have my pledge that I will not lie to you. If I do not know the answer to a question, I will listen to the citizens, do my research and maintain a public dialog so that everyone gains a clear understanding of the issue.

Hopefully, voters remember what the incumbent of the at-large District 5 has done to them. I have no previous government experience, but I know how to be accountable and stand-up against government gone wrong.

Early voting has begun and I would be grateful for your vote. Please look me up on my Facebook page at “Ann Wittenberg for Fayette County Board of Commissioners.” I’ll be your voice!!