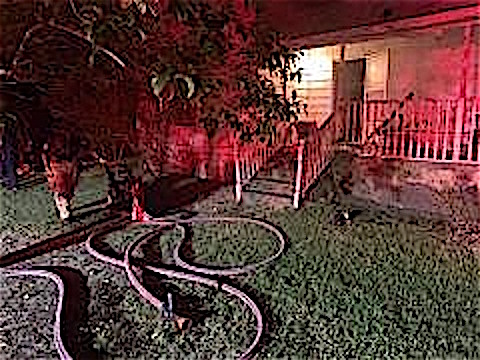 A call from a 9-year-old girl on Oct. 11 brought fire units to a structure fire at 303 County Line Road east of Fayetteville. Eight people were evacuated, with two transported for evaluation and treatment for smoke inhalation and burns.

Fayette County EMA Director Mike Singleton said 911 on Oct. 11 at approximately 9:42 p.m. received a call from a 9-year-old for a building fire with victims possibly still inside at 303 County Line Rd.

“Upon notification of possible victims, additional units were requested and dispatched,” Singleton said. “Fayette County Sheriff’s Office deputies arrived on scene first and entered the smoke and heat-charged interior to remove several elderly residents. Fire/EMS units arrived, completed a primary search to ensure that there were no more victims, and extinguished the fire.”

A total of eight people were rescued or evacuated. Two patients were transported for evaluation and treatment for smoke inhalation and burns. The house sustained significant smoke and fire damage, said Singleton.