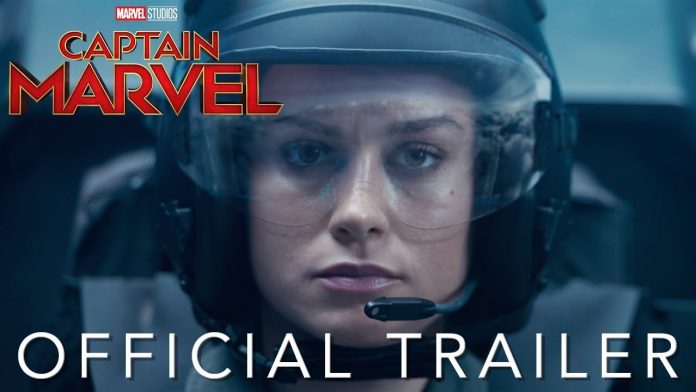 The lead-up to Captain Marvel has been a rocky one.  Sexist internet trolls, laughable trailer complaints, and the fear of Marvel getting “woke” surrounded this film and caused some to overanalyze it till the cows come home.  In my opinion, Captain Marvel is a fun and funny popcorn movie that can empower men, women, and space aliens to become the best version of themselves and still have friends in their corner.  Add good performances, colorful visuals, and a spunky lead character, and Captain Marvel stands as a shining example of how to combine empowerment with entertainment.

The Cree alien Vers (a spunky Brie Larson) is an amnesiac warrior on a mission with her mentor Yon-Rogg (Jude Law) to stop their enemies, the Skrulls.  However, the mission goes badly, with Vers crash landing on 1990’s Earth.  She teams up with fresh-faced SHIELD agent Nick Fury (a de-aged Samuel L. Jackson) to stop the Skrulls from finding a piece of technology that could win them the war, all while discovering both her identity and inner strength along the way.

Captain Marvel is a pure blast of fun.  Like Thor and Guardians of the Galaxy, this film has an undercurrent of humor to bevvy the more bizarre sci-fi elements and endear you to its characters.  Brie Larson provides understated charisma and believability for her role, making for a strong and relatable character I look forward to seeing again.  Samuel L. Jackson also charms, and the villain, while not as threatening as Thanos in Avengers: Infinity War or relatable as Killmonger in Black Panther, is better-written than many Marvel baddies.  The 90’s jokes and references are a nice edition and never overstay their welcome.  On the negative side, we get little explanation of the Cree culture besides “We hunt Skrulls”, there are two or three isolated moments of cringey dialogue, and the 1st 30 minutes drag a little.

Despite these issues, I watched Captain Marvel with a smile on my face, happy to see a company I love continue to place story and character above politics and crowd appeasement.  Should Marvel’s plans to make this character a more prominent player come to fruition, I look forward to following her adventures.  See Captain Marvel.  3.8 out of 5 stars (Highly Above Average).

Rated PG-13 for Sequences of Sci-Fi Violence and Action, and Brief Suggestive Language (in a flashback, a male pilot tells a female character that it’s called a “Cockpit” for a reason.  Sigh).

All images courtesy of IMDB.com