Unexpected expenses can come out of now where and have a big impact on a fixed income. Brandon Jordan with Arch Advisory gives tips to coping with unplanned costs such as medical bills, needed house renovations, vet bills or more. Learn strategies to re-budgeting, adjusting spending habits, managing your finances and seeking resources when we find ourselves facing big expenses unexpectedly. This program is FREE but pre-registration is required. 770-461-0813 or email register@fayss.org (include name, phone number and event title). FSS members and non-members welcome. www.Fayss.org.

It’s often said that writing is a lonely profession. For some writers on the passage to publication, that’s probably true. But for many, the journey includes an entourage of characters both real and imagined, including those outside of the book: encouragers, listeners, first readers, editors, and many others. Each of our six authors will talk about “the entourage” that accompanied them on their way to seeing their book to print. Reading and signing to follow.

Join us March 31 at 2 p.m. downstairs at Peachtree City Library, for a lively discussion with the following authors:

Dennis E. Chase, author of “The Nun and the Guns.”

Paul Lentz, author of “The Cry of the Innocents,”

Lorraine Hillman, author of “Lifetime of News: A Memoir.” a woman proving herself in the early days of television journalism

Paul J. Salvatore, author of “Brave New Universe: One Man’s View of All That Is.”

The business and finance authors:

Bonnie Bajorek Daneker, co-author of “It’s In There! The Innovation, Dedication, and Determination Behind the Birth of Prego Spaghetti Sauce.”

Saturday on the historic courthouse square in Fayetteville, from 3 to 5 p.m, the entire community is invited to this afternoon of family-friendly fun as Fayetteville First United Methodist Church partners with Main Street Fayetteville and local businesses.

“We are prepared for EasterPalooza and the anticipated 2,500+ participants,” said Carson Thaxton, event organizer at Fayetteville First UMC. “Each year the event has grown, and we are ready with eggs and entertainment as our community comes together for an afternoon of fun.”

DJ Willy WOW will emcee the event leading engaging and interactive music at the block party on the square. He has performed all around Atlanta for kids’ programs including the Zoo Atlanta. With giant inflatables, family games, age-specific Easter egg hunts  and samples provided by local businesses, EasterPalooza will be a family event for everyone to enjoy. And it’s all FREE.

For the age-specific egg hunt schedule and more information, visit  fayettevillefirst.com or fayetteville-ga.gov.

Fayetteville First United Methodist Church is located next to the historic courthouse in downtown Fayetteville at 175 East Lanier Avenue. 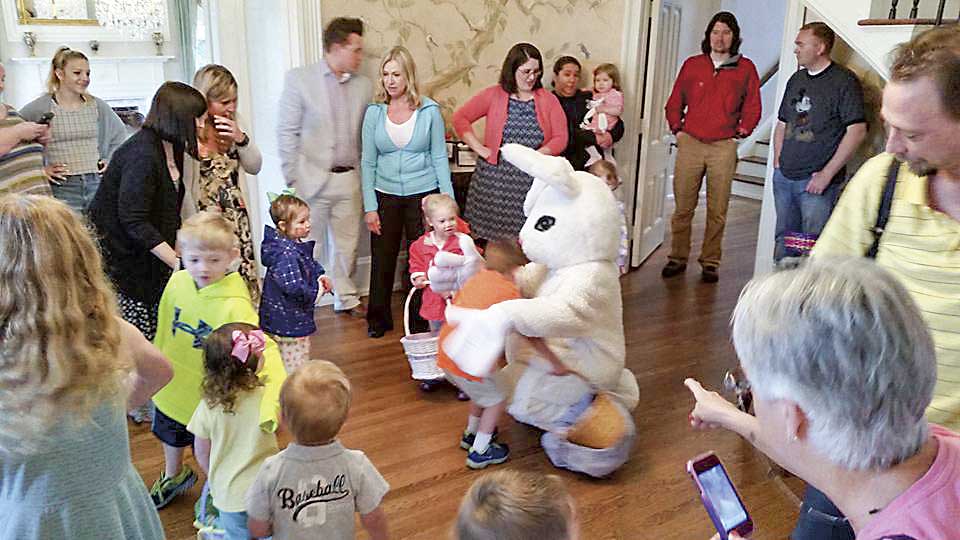 Eggs and art await you Saturday in Newnan

Please join us for an Easter egg hunt and a chance to have your child (or grandchild) get their picture taken with the Easter Bunny March 31, from 10 a.m. to noon at the McRitchie-Hollis Museum, 74 Jackson Street.

While you’re here, see Lavinia Barron Rosenzweig’s colorful hand-painted Easter eggs, which will be on display in a mini-exhibit through Easter Sunday. “Vinnie” Rosezweig was a well-known local artist who sometimes called herself the “Easter Bunny” due to the thousands of eggs of she personalized during her lifetime.

During the 1980s Vinnie Rosezweig first began contributing to the Easter season with her brightly-painted eggs. In one news story Rosenzweig told a local reporter that she “felt like a failure compared with the cake-baking mothers” in her son’s preschool kindergarten class, so she decided to go a different direction.

“Mrs. Rosenzweig told the teacher she would make each child an egg with his name on it,” the newspaper reported. “She had been dabbling in ceramics, and the personalized Easter eggs were a big hit. So much so, in fact, that 10 years later some parents are still ordering the custom-painted eggs.”

Originally when she painted the eggs “just bundles of them” were sold in downtown stores, she said. Some store owners would buy out the eggs before they ever hit the shelves. She recalled giving an egg to a woman following an aerobics class, and “she bought the whole batch.”

Each of the ceramic eggs took Rosenzweig between two and eight hours to complete. The eggs were mostly biographical, with many of them representing specific events in the lives of the recipients. One featured a bunny on a needlepoint pillow, specially made for a needlework enthusiast; another, made for a local cheerleader, showcased a young bunny in a cheerleader uniform.

In a ledger, Mrs. Rosenzweig kept a record of eggs she painted for her customers over the years. Margaret Barron had the largest collection she knew of, numbering about 40.

Rosenzweig said she had favorites among the eggs she painted, one of them belonging to Catharine Barron. She made Catharine an egg with a black background covered with Swatch watches. One of the watches had a small rabbit face with rabbit ears for the hands of the watch.

For classical music lover Jim Hardy, Rosenzweig painted on a large, lilac egg the first two measures of the first violin part of Beethoven’s Fifth Symphony. A bunny’s face appeared in the lower part of a treble clef on the egg.

“I went straight to my music books” for Hardy’s egg, she said, nothing that the notes and accent marks were accurate.

Another favorite egg was one owned by Bobby Lee, an avid hunter and a member of Ducks Unlimited. Rosenzweig said Lee’s egg had a bright blue background covered in wildly quacking white ducks with orange bills and legs. She named this particular egg “Unlimited Ducks.”

“And that has remained one of my all-time favorite eggs,” she said.

Her past Easter eggs have included a batch of about a dozen women in elaborate Easter bonnets. She said she would love to know what became of those eggs, which were sold in a downtown store.

The first step in painting her eggs involved covering them with about four coats of stain, “and that’s real simple, idiot work,” she said. She also gave her eggs a lot of drying time in-between coats before decorating them and then spraying them with a high-gloss “fix it” spray.

Rosenzweig signed the back of all of her eggs “Vin Rose,” an abbreviated form of her lengthy name. For about two years her sister, Carolyn Watford, helped prepare the eggs, and those eggs were signed “Cal Vin.”

On a mantle in Rosenzweig’s house on Greenville Street sat a number of eggs painted for her family. A “Super Mario Bunny” egg for her son Gray indicated her son’s interest in Nintendo video games, and an egg belonging to a daughter Guion featured a rabbit in one of Guion’s Halloween costumes.

Rosenzweig had a master’s degree in music, and was a well-known local thespian, but she had been  interested in the visual arts “since I could hold a crayon,” she said, and eventually studied  under Tom Powers, the namesake of the now-defunct Powers Crossroads Festival.

Rosenzweig’s eggs became more detailed over the years. Two years in a row she made about 300 eggs for Easter, but she always tried to paint at least 20 to 40 eggs each year.

Come see them yourself at the museum anytime in March! We’re open from 10-3 Tuesday through Saturday.

The hunt is sponsored by Shekinah Glory Fellowship Center Saturday at noon at McCurry Park, 185 McDonough Road, Fayetteville, Ga. Every child will receive a free Easter basket, there will be cash prizes, and every adult will receive a chance to win a 55inch TV. This event is free and open to the public. For more information, call 678-884-6655, email us at contact@shekinahgloryfc.com or visit our website at, shekinahgloryfc.com.