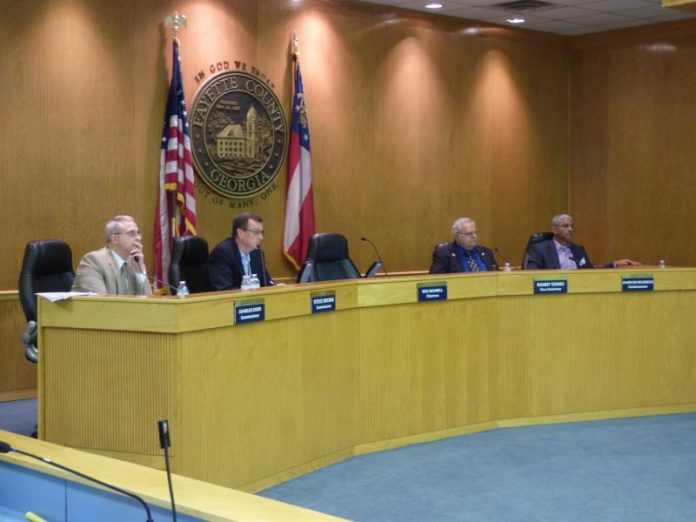 The Feb. 8 meeting of the Fayette County Commission was loaded with agenda items that included killing a roundabout proposal, additional consultation with Fayetteville on an annexation request, a resolution on regional transportation planning and issues relating to the county animal shelter and complaints about the 911 Center.

What would have likely been the most contentious of the agenda items was one that would have dealt with a discussion and potential action related to complaints and investigation of the working environment at the 911 Center.

The item was tabled until Feb. 22 when Chairman Eric Maxwell can be in attendance, though public comments were made on the topic due to the large number of people attending and wanting to be heard.

Those comments, with nearly 20 people speaking, came with people having their say on both sides of the complaints leveled against 911 Director Bernard Brown, those dealing with county employee personnel records being posted on social media by Commissioner Steve Brown and other associated issues.

Some from the audience supported the posting of the personnel file postings, while others felt those actions, while apparently legal, were nonetheless unethical and not based in fact. Many of the comments came from former and current 911 employees.

Other public comments stemmed from Commissioner Brown’s ongoing issues with County Administrator Steve Rapson. Some sided with Brown, while others, such as former Commissioner David Barlow, likened Brown’s actions to a witch hunt against Rapson.

Many of the comments, along with some statements from commissioners, were loaded with emotion and diametrically-opposed points of view.

The issue will be on the Feb. 22 agenda.

Also at the meeting, commissioners took up the issue of the request for proposal for the privatization of the county animal shelter. The item requested by Brown was also leveled at Rapson.

At the conclusion of the topic and after a number of public comments, Brown’s motion to solicit public opinion on privatization and bringing that input back to the board was defeated on a 1-3 vote.

One another topic, commissioners on a 3-1 vote agreed to inform the Ga. Department of Transportation (DOT) that Fayette is no longer interested in the two roundabouts to be located on Ga. Highway 92 South.

The project, which has been on the state’s planning timeline for years, would have led to the installation of two roundabouts, at Seay Road and Antioch Road, with a price tag of $8 million. Commissioners, except for Chuck Oddo, objected to the county having to spend $779,000 to move county water lines out of the state right-of-way.

Public Works Director Phil Mallon noted that DOT could go ahead with the project, requiring that the water lines be removed regardless, at what could be a higher cost to the county.

Another agenda item dealt with a proposed annexation of property off Banks Road and Ellis Road into Fayetteville. Questioning issues such as density and appropriateness, commissioners on a 3-1 vote objected without conditions. That move will provide Fayetteville with the opportunity to have the developer temporarily withdraw the request and give city and county staff time to consult on the proposal before returning to the board.

Yet another item dealt with Brown’s resolution that would remove Fayette County from Regional Transit Planning and the burden of helping fund those potential projects.

Though bills relating to Regional Transit Planning have not passed vote in the General Assembly, commissioners voted 3-1 to request that Fayette be exempt from the funding, but not the planning, for regional transit.

Oddo in his opposition agree with the Fayette County Transportation Committee that said they had not received sufficient time to review the issues and that adopting the resolution would be premature.

A more detailed account of the above items will be included in the Feb. 14 edition of The Citizen.